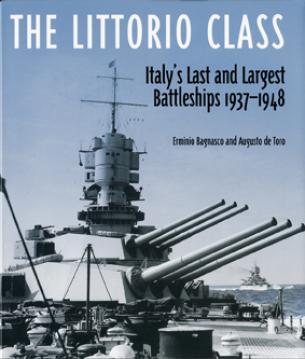 For its final battleship design Italy ignored all treaty restrictions on tonnage, and produced one of Europe’s largest and most powerful capital ships, comparable with Germany’s Bismarck class, similarly built in defiance of international agreements. The three ships of the Littorio class were typical of Italian design, being fast and elegant, but also boasting a revolutionary protective scheme – which was tested to the limits, as all three were to be heavily damaged in the hard-fought naval war in the Mediterranean; Roma had the unfortunate distinction of being the first capital ship sunk by guided missile.
These important ships have never been covered in depth in English-language publications, but the need is now satisfied in this comprehensive and convincing study by two of Italy’s leading naval historians. The book combines a detailed analysis of the design with an operational history, evaluating how the ships stood up to combat. It is illustrated with an amazing collection of photographs, many fine-line plans, and coloured artwork of camouflage schemes, adding up to as complete a monograph on a single class ever published.
Among warship enthusiasts battleships enjoy a unique status. As the great success of Seaforth’s recent book on French battleships proves, that interest transcends national boundaries, and this superbly executed study is certain to become another classic in the field.