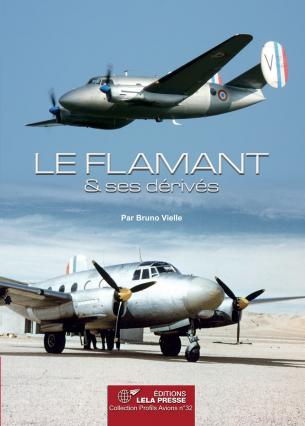 For everyone, the manufacturer Dassault is associated with the Mysteries and Mirages. However, it is with a twin piston engine that Marcel Bloch, become Dassault, returns to the front of the aeronautical scene in the late forties. Indeed, almost 70 years ago Mérignac flew his first plane, the MD.303. His descendants, produced in three versions, MD.315 of Colonial Police, MD.311 Bombardment and Navigation Training and MD.312 Liaison and Flying School, will be the first French aircraft of the postwar products. serial. If the plane was named Flamingo by the administration, its users simply call it the Dassault. It will ensure the presence of French wings in the colonies until the dislocation of the French Union. Its school versions will train generations of transport crew for nearly 34 years. It will be the liaison plane for all Air Force units. This book invites you to discover the history of Dassault and its direct derivatives Spirale, Community and Swallow.
With 320 pages, more than 550 photos, more than 80 plans and diagrams, enhanced with 49 color profiles by Pierre-André Tilley.

NEWSPAPER :
- When the war ended in the spring of 1945, French aviation was very poor. The Americans had supplied various types of aircraft, but often used and mainly combat aircraft. French factories were used to manufacture German devices and the production of some could continue for the benefit of France. Marcel Bloch, who became Dassault in 1946, returning from captivity, understood that some of his studies could fill gaps, especially in the field of transport. With the Air Force needing this type of aircraft, the Avro Anson's breathless, Dassault planned a small twin-engine aircraft that led to the MB 303, which underwent several modifications. In the end, the aircraft was produced in three variants, in order the MD 315 for colonial police, the MD 312 for flight training and flight training and the MD 311 for bombing and navigation training.
These three versions, officially baptized Flamant but called by their crews "Dassault", which were the first French aircraft produced in series after the war, have equipped all the units of the Air Force and Naval Aeronautics for almost forty years.
Bruno Vielle's book traces in detail the career of all the Flamants, from the first studies to the devices still in condition, including the Algerian war, the colonies, all the uses of the various versions as well as studies for possible developments such as the swallow and finally use as a school plane.
The last narrative chapter is devoted to the fate of the Flamants after their official retirement from service. Very interesting part but which would have benefited from being a little more fleshed out, in particular by mentioning the cinematographic career of the Flamants. But this is nitpicking on our part.
The work ends with two more technical chapters, the first detailing the characteristics of the Dassault, with strong sketches and detailed drawings, the following retracing the career of each aircraft produced, with its assignments and its final fate.
Bruno Vielle's book is the result of long research work which results in a very precise text where the concern for historical precision and mastery of the subject is reflected in each chapter. The iconography is up to snuff with many photos, mostly unpublished, from official sources or private collections. Plans and profiles of Pierre André Tilley, well known to enthusiasts, are the icing on the cake.
After all these years it seems that we are in the presence of the reference work on the Dassault Flamant series, the first devices to bear the initials of the famous manufacturer. © J.-L. FOUQUET for Cocardes.

- First aircraft produced by Marcel Bloch under the name Dassault, from the post-war period, the Flamant had three versions: MD 315 of colonial police, MD 311 for bombardment and navigation training, MD 312 for liaison and pilot school. His users simply called him Dassault, and he was familiar with Air Force bases, including those in the colonies. It is thanks to René Lemaire, former della house and conscientious curator of the manufacturer's technical and photographic archives, that the author was able to return in great detail to the development of the legendary twin-engine, from the BA 30 project to the MB 303 and MD 315. The very rich iconography allows us to discover the history of the device and its direct derivatives (Spiral, Community and Swallow), and the model maker had the good idea to place the many profiles in color as we went along. as the story unfolds. A remarkable work, well in line with the books published by this publisher. 320 pages, more than 550 B&W and color photos, 80 plans and diagrams, 49 color profiles, text in French. © Alain Crosnier - Aif Fan.