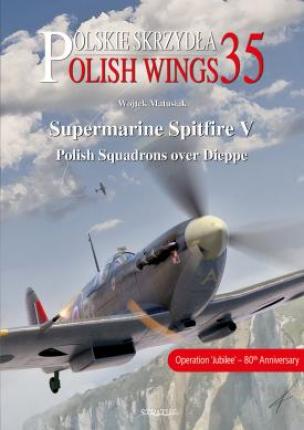 Year 2022 marks the 80th anniversary of the Allied landing at Dieppe, France, on 19 August 1942. That was one of the most controversial battles of the Second World War, which also involved extensive air operations to provide direct support for the amphibious assault and to defend the troops and the fleet against the Luftwaffe.
This book is a tribute to the 1st Polish Wing, Fighter Command’s most successful wing during the operation. The wing provided 10% of the Spitfire squadrons engaged in the battle, suffered 3.5% of losses and was credited by Fighter Command with 17% of all enemy aircraft destroyed. Nos. 303 and 317 Polish Squadrons were the top-scoring units that day. Notably, they achieved this while still flying the Spitfire V variant, while some Fighter Command squadrons already had the much improved Mk IX.
Several hundred of carefully selected and extensively captioned images depict Spitfires of the five Polish squadrons, as well as the men who maintained and flew them in support of the Dieppe landings.