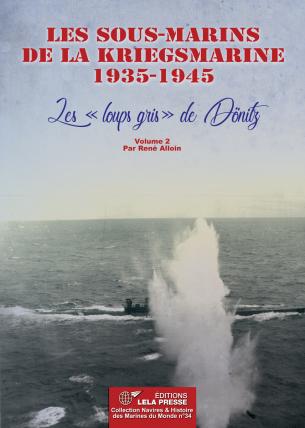 Orders paid directly on the site will be debited immediately. ORDER FORM in PDF attached.
Winston Churchill, British Prime Minister during World War II, said: "The only thing that really scared me during the war was the threat from German submarines."
In these two volumes on the U-Boats, the author takes up all the German submarines to describe their characteristics, commands, victories and disappearances, whether during the war or after the end of the Second World War.

In this first volume, the author describes the creation of the Unterseekriegsmarine, which began in 1922 despite the fact that the Germans were prohibited from owning an underwater weapon again. For this, many tricks had to be employed, until the German-British naval agreements of June 28, 1935, which allowed Hitler to officially unveil his first construction program.
Finally, you will find details of the first 770 U-Boote cards with the names of the buildings they sank.

The second volume on the submarines of the Kriegsmarinerelates the dark period of the Unterseekriegsmarine which begins after May 1943 The Allies will finally have enough escorts, long-range planes covering all areas up to - inaccessible and increasingly sophisticated and efficient ASM control means. The continuation of the datasheets, from U.771 to U.6442, includes a comprehensive study of K-Verband; these small pocket ships had the difficult mission of maintaining an offensive activity against Allied ships while awaiting the entry into service of the models XXI and XXIII intended to reverse the course of the war at sea.
The author also makes us discover the shipyards, the bases and the bunkers built for the protection and the maintenance of the U-Boats, the evolution of the armaments and the equipment of these submarines and the life of the men on board and outside. of their warlike activities. Finally, a detailed recap of all foreign submarines captured by the Kriegsmarine is included in this second volume.

In total, these two volumes, comprising 672 pages, more than 1,670 photos, 190 color profiles and 815 U-Boote badges, constitute a reference work for all history lovers.

These two volumes bring together, for the most part, the material published in the five specials, Navires & Histoire, which are now out of print. However, the author has endeavored to make numerous additions and corrections. The opening of certain archives as well as recent discoveries have made it possible, for example, to provide new information relating to the position of certain wrecks. This book is therefore the result of long, meticulous work undertaken by the author for years. It will thus provide the reader with an excellent basis for the submarine weapon of the Third Reich!

Contents of Volume 02:
- Technical files of the submarines cited in this book
- 1944: the dark period of the Unterseekriegsmarine
- Technical sheets for submarines (U.771 to U.6442)
- Submarines captured by the Kriegsmarine
- The K-Verband
- Explosive canoes
- Armed fast boats
- Human torpedoes
- Pocket submarines
- Detail of pocket submarines U.5001 to U.6442
- Construction sites, bases and bunkers
- Construction sites
- Basics and bunkers
- Arming
- Equipment
- Men
- Appendices
- 1. The fleets to which the submarines were assigned
- 2. List of U.Boote commanders
- Sources & references; thanks-