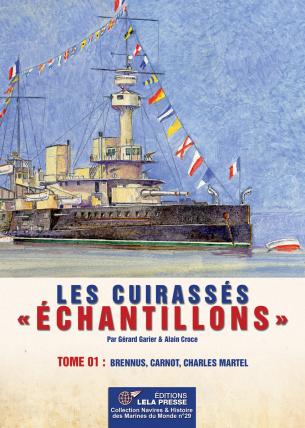 This book includes the characteristics and history of three battleships Brennus, Carnot and Charles Martel.

Despite its youthful setbacks, the Brennus is most interesting because it breaks sharply with its predecessors with the caliber unit of its main armament in closed turrets of 340 mm and a secondary armament with the excellent gun of 164.7 mm rapid fire. When compared with the foreign battleships of the same period, he holds his rank well.
Throughout his career he will bear the mark of admirals.
For the construction of the following units, the French navy could have inspired the Brennus by modifying and improving it to obtain a battleship of equal or superior value to contemporary foreign vessels.
Alas, the opposite has happened and instead of moving forward, the following battleships of the "1890 Program" will be lower in all areas at Brennus. They will be baptized Carnot, Charles Martel, Jauréguiberry, Bouvet and Masséna. Built on the ideas of the "Young School" whose supporters are in power, these five battleships will receive the unflattering name of "fleet of samples", because built in five yards, with different plans, and according to personal ideas construction engineers of these sites; they will have completely different silhouettes. Only their main and secondary armament will be the same as well as the number of pieces and their disposition (except for the Jauréguiberry which will have four double turrets of 138 mm instead of eight simple turrets). The displacement will not exceed 12 000 t and the speed 18 knots. The first two battleships "samples" are studied in this volume: Volume 1.
All on 272 pages, with 392 photos, 88 plans and diagrams, 12 profiles and 6 watercolors by Jean Bladé (†).

Volume 2, will include the last three "Samples" Jauréguiberry, Bouvet and Masséna, to this group of battleships we will add the Henri IV, unique and original building.

We talk about it on the Net and in the Press.
You associate John Galliano, Karl Largerlfeld and Jean-Paul Gaultier with a few admirals and that gives one of the biggest creative delusions that the French "navy" has never known ... at the same time on the educational level it has existed since always a kind of hiding war and points of view between the public and the private, the two schools having visions often opposite to each other and in this case, this results in some architectural monstrosities and what about the operational nothingness generated by the placing in "very relative service" of ships with dubious qualities and very hazardous combat capabilities ...
In fact to summarize a little, the "samples" are the absolute proof of the confrontation between the "old" followers of a prestigious navy with the doctrine of obsolete jobs of the good old battle online and the "new" says of the "young school" followers of a specialized navy and adapted to the requested missions ... in fact it is battleships against torpedo boats, it is a kind of technological confrontation between jurassic park and the silicon valley ... all in a context of budget restrictions and military defeats ... The atmosphere is not really cruising is having fun ...
So this high quality book and volume number 1 offers you one of the most extraordinary maritime catalogs there is and which even the Redoute, however adept at bad taste would have refused paternity, it can be said. !! .. What must be emphasized and highlight, it is the fabulous work of research and decryption of the two real Benedictine monks namely Gérard Garier & Alain Croce who succeed with talent in making a subject not obvious, fascinating at will, meticulous and talented work, research thrusts and unpublished documents and illustrated with madness that light up a delirious period of the glorious French national navy with very high quality and an extra lucid vision ...
We spend a great time reading and we learn a lot about the evolution of today extinct naval species ... © Marc Debeer - Fleuves & Canaux.