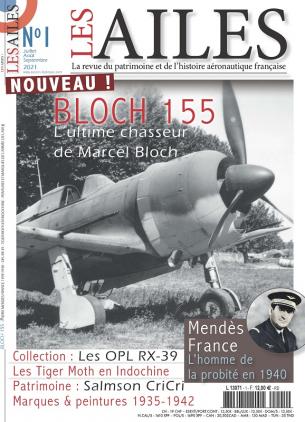 This review, which we wanted to be quarterly, will ambitiously embrace the whole of French aeronautical history and heritage.

Its editorial team, already constituted, brings together the best French specialists in history, technique and collection.
LELA Presse chooses innovation with this magazine dedicated to French aeronautics under the broadest aspects of our history, whether civil or military, scientific, industrial or technical.
We will highlight all those who made French aeronautics, but also those who do it today or who work for its preservation and its life. Because the heritage of tomorrow is being built today!
Our first issue will reflect our ambition: to make you discover with passion, in a lively and unprecedented way, entire sections of French aeronautical history. The bet is daring. We take it because we know we can count on you and your pleasure in making discoveries with each new issue.
Little foretaste of this first issue.
You will discover the history, such as it has never been approached nor illustrated, of the last Bloch hunter of 1940: the Bloch 155. More than 30 pages of documents never seen until today, as well as testimonies and new information, color profiles worked out in the smallest details ...
We will discover the aerial career of an extraordinary man ...
Are you still wondering about the paintings of French cameras from the 1930s? Thanks to completely unpublished archives from industrialists and the Air Force, you will have before you the beginning of a long series devoted to this subject that we thought we knew so much ...
For you, collectors! You will discover extremely rare collector's items and their history, over time, such as OPL collimators ...
And we will also meet restorers, builders of exact replicas, passionate collectors who bring new life to national devices or who preserve an unknown heritage.
We know your interest in the 1940s and their mysteries, which explains the content of this first issue!
As you will soon discover, our magazine "Les Ailes" will take you on a journey through all eras, from the origins to the most modern and on the five continents.

- New magazine devoted only to French Aviation ... it takes courage to launch a new magazine on a relatively specialized subject in these troubled times!
Last month I hadn't read it yet, so it was just an announcement. Today I read it so I can talk about it.
The summary is particularly tempting with the variety (men, machines, history, camouflages) and coherence (everything is more or less focused "World War II", the authors - intelligently - did not try to do the "of everything, a little" which in the end does not satisfy anyone. There we have a respect for the rules of classical theater: unity of time (WW2), place (French territory including "the Empire") and d 'action (the Air Force). The "warbird" article on the restoration of the Salmson Cri-Cri unfortunately disrupts this a bit, but it seems fashionable (other history magazines of the aviation - and military vehicles - have turned old vehicle restoration magazines over time ...). Similarly the "model" part is limited to small touches which seems justified: today there are dedicated magazines models, we are no longer in 1969!
Then let's see the content starting with the biggest: the 38-page file devoted to the MB 155 is an excellent idea and well composed with a contextualization in the line of the MB15x, a description of the device, its operational career and its camouflages and marks (oddly no reconstitution of the camouflage of the wings is proposed). And we conclude with a superb modern shot (there seems to be nothing from the period) at 1/48 scale. Everything for the hobbyist / historian / model maker etc ... I look forward to future other files ...
The article on OPL R.X.39 collimators is an excellent idea that we can hope will be continued with other equipment: radios, fire extinguishers, pilot's seat etc ...
The article on Pierre Mendès-France brings a human touch to what could be nothing but sheet metal and bolts. Moreover being at the base a politician he has a vision and a life which is not limited to impressions of theft ... again I hope that these articles on men will not be limited to "aces" and others and that builders, design office engineers, mathematicians and mechanics will also be in the spotlight ...
The Tiger Moths in Indochina bring a double touch of exoticism: aircraft of foreign origin and far from the Metropolis.
The study on Marks and Paintings is mainly there to whet your appetite and encourage you to read the articles in subsequent issues.
Maybe the missing part of this great sauce is the strategic aspect? But undoubtedly if this magazine continues its momentum it seems well placed to be for the French air force what the always excellent Armored and Material War (of another editor but to which Mr. Comas contributes regularly) represents for land weapons. © Modelstories

- It is a kind of rebirth, a return to the sources in the form of renewal because the magazine "Les Ailes" dates to its pre-war origins ... Forgotten, relegated to the category "archives of the aeronautical press", it returns in the shelves of good booksellers thanks to the LELA PRESSE team ...
Dusted and uncluttered and it makes sense. Upgraded, the modernized magazine "Les Ailes" is faithful to the originals in the spirit which was then its ... devoted almost 100% to the French aviation of a certain time with this so singular tone which was then given to it ...
Read the summary carefully and immerse yourself in this atmosphere of before, which was a kind of funny War before its time with a waltz of machines with hesitant technology, built in the atmosphere of a popular front and of industrial privatization where transparency was not required and therefore ineffective ...
Good first reading discovery and good flights for the next issues which can only improve over the publications ... and then congratulations for this "new" and daring creation ... © Fleuves & Canaux

- This is indeed an evocative name but not unknown. Created by Georges Houard, exactly 100 years ago, this
journal is also associated with Aviation Magazine, then Air & Cosmos.
Certainly the renaissance of the name can be welcomed here, especially as this new magazine qualifies as THE review of French heritage and history. But with this seductive subtitle, he would almost forget the existence of our review Le Trait d'Ution, which for more than 50 years has covered similar topics. Well, it's true that we don't have the audience of a magazine sold on newsstands ...
That being said, this first issue deals with both civilian and military. On the menu, 36 pages of a large file devoted to the MB 155, a history page with The French Tiger Moths in Indochina, the human aspect is not forgotten with a portrait of Pierre Mendès France, a heritage page with the restoration of a Salmson Cricri (n ° 9 ex F-BFNG), to end with the presentation of a vast subject devoted to paintings and
brands of French devices between 1935 and 1942.
Piloted by Matthieu Comas whose articles we know published in the journal "Avions", we have here a beautiful magazine printed on a beautiful paper with plans, technical drawings, color profiles, all ingredients to make a magazine enjoyable.
We can see that, even if this first number is largely devoted to the 1940s, "Les Ailes" has for aim to "make us travel" in all the eras where the French wings shone. Appointment is made for the fall with n ° 2 and have a good flight to this new publication. © Régis Biaux for Le Trait d'Union.