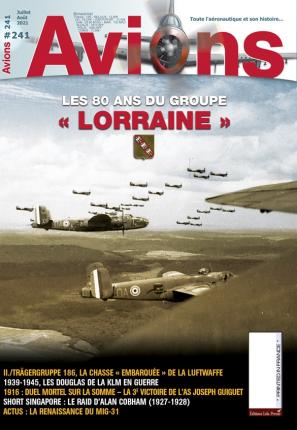 If our previous issue was devoted to the aces of aviation, in AVIONS 241 we chose to give pride of place to those we rarely talk about: bombers, transport planes, seaplanes, observers ... The first served on the B-25 Mitchell of the French bombing group "Lorraine" which is celebrating its 80th anniversary this year. The latter crisscrossed the air routes of Europe and Asia with the Dutch company KLM in the late 1930s, before participating in WWII with the German AND British air forces. The third made a re-marked raid from England to South Africa in the late 1920s, under the command of famous explorer Sir Alan Cobham. The fourth was an anonymous German observer of the "Great War", who had the misfortune of crossing paths with an ace of the Stork squadron ... To all those "left behind" in stardom - to history yet so rich as you will see - we have added the astonishing career of the carrier fighter group that the aircraft carrier Graf Zeppelin was to embark on. The ship was never finished, but its fighters fought from September 1939 to July 1940, until they were transformed into a "classic" Luftwaffe fighter group. Finally, we give you in the “News” section news of the last interceptor in service in the world: the MiG-31 “Foxhound”, successor to the famous MiG-25 “Foxbat”. This Mach 3 fighter currently employs hy-personic missiles and is now attacking satellites!

Summary of this N ° 241:
- Letters from the readers
- With the B-25 Mitchell of the “Lorraine” group in 1945
Full story, by Bertrand Hugot
- It should have been the on-board fighter of the Luftwaffe:
Le II./Trägergruppe 186 - Full story, by Jean-Louis Roba
- KLM's pre-war DC-2 and DC-3
Second and last part, by Jean-Louis Roba
- A new era for seaplanes, the Short Singapore
Part Two: The Alan Cobham Raid, by Geoffrey Bussy
- December 20, 1916: fatal duel on the Somme
The third victory for ace Joseph Guiget
Full story, by Cynrik De Decker (with the participation of Christophe Cony)
- News: the rebirth of the MiG-31
Full story, by Stéphane Nicolaou.