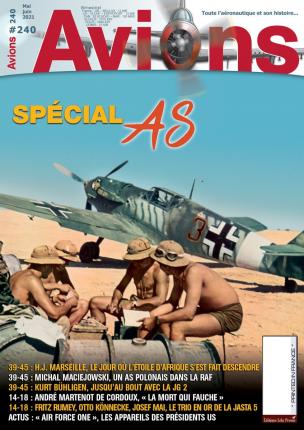 Editorial:
Since our number 100, every two to three years we offer you a magazine that pays tribute to the most famous of aviators: the aces. A subject which may seem a little "people" to some, but which is the one which most captivates the public in general and the editor in particular ... Especially since all the aces of aviation are not known and that much remains to be discovered on some of the greatest. This issue is exceptional because it is the first to offer you only full stories; it contains the biographies of six aces, the story of the fight during which the famous Hans-Joachim Marseille was shot down in 1941, but also the story of an extraordinary air fleet: the one used by Presidents of the United States of America since World War II. Christophe cony