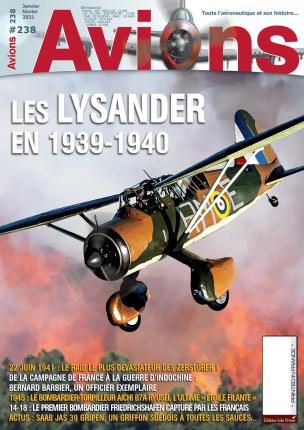 In front page :
A Lysander Mk.I of No 26 Squadron in action over northern France in May 1940 (composition by Jean-Baptiste Delcambre)

On the cover, a rather particular mount that the Wesland Lysander, born from a concept based on the observation of the ground on behalf of the field artillery of the ARMY, massive, mastoc, it is a big solid beast which knows how to take the blows of small arms and which as a bonus has clear STOL flight qualities that flies slowly, it takes off short and it lands in a pocket handkerchief ... quite quickly relegated to so-called secondary but essential roles, produced in England and Canada, the "Lyzzie" will find a very special place by becoming in history as the plane of the secret agents, a discreet role ... but this is in the order of a sequel to this beautiful portrait of a machine that is out of the ordinary ... beautiful photos and a text strong in discovery ...
I add a complement with the presentation of this rare book presented here in this link: LYZANDER - La Tourmente au clair de lune
As for the remaining articles, they are all worth an in-depth reading due to the quality of the whole with authors mastering their subjects treated here with care ... the Avions magazine holds its rank and its place in your personal bookshop ... © Marc Debeer - Fleuves & Canaux.