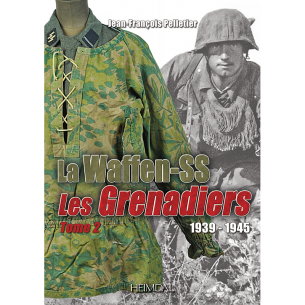 This encyclopedia devoted to the uniforms and equipment of the infantrymen - called "Grenadiere" at the end of the war - of the Waffen-SS became essential for researchers, historians, collectors but also the very numerous enthusiasts of the history of the Second World War.

Indeed, since the "troops at disposal" and Hitler's personal guard, the LSSAH, the evolution of uniforms has been considerable. Historical publications present us with a small part of the thousands of photos available in the archives. But their descriptions are often very thin. A photo showing a "grenadier" wearing a 1943 effect cannot have been taken in 1941.
This encyclopedia will allow us to understand these developments.

This second volume presents the helmets, the birth, the design and the manufacture of the SS camouflage, the overjackets, the helmet covers and the winter effects specific to the Waffen-SS. A third volume will be devoted to the camouflage veil and the face mask, the tent canvases, the camouflaged cap M.42, the camouflaged outfits M.44 and M.45 but will also present the belts, the shoes (boots and ankle boots) , insignia (national emblem, collar tabs, shoulder tabs, ranks and function insignia) and finally an almost exhaustive study on a subject specific to the SS, sleeve bands.
Period photos and sketches support photos of original parts. It offers you a very rich documentation aimed at completeness, a considerable work that will become a reference.