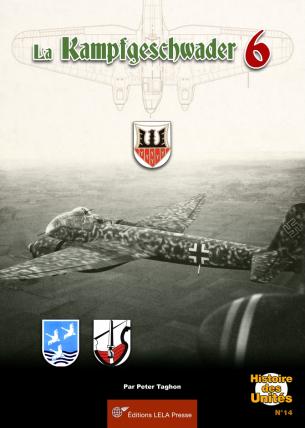 The 6th Luftwaffe Bombardment Squadron remains a little-known unit due to its relatively short existence. It was indeed put together with great difficulty by an order of October 1941, this squadron having been designed to support KG 2 in its sporadic operations to harass Great Britain. Its training was slow and laborious for lack of staff. The poverty of the Luftwaffe (clearly visible at that time) explains why the entire III./LG 1 had to be recalled from the eastern front to include it in the new squadron. It was not until August 1942 that the first Ju 88 of KG 6 operated across the Channel, however, the squadron was immediately engaged in the fighting at Dieppe during the bloody landing of the Canadians. In November, the unit - shared between France and the Netherlands - served as a back-up to occupy the French Free Zone. Concomitantly, its best crews were called up in an “Einsatzgruppe” sent urgently to the Mediterranean in support of the Afrika Korps.

At the beginning of 1943, KG 6 found itself torn between Italy, Denmark and France from which some action continued to be launched on Great Britain. In June, however, in full reconversion on Ju 188, two Gruppe were withdrawn from France to return to fight in Italy. At the end of 1943, the II./KG 6 was also sent to fight in the Aegean Sea.
It was not until the beginning of 1944 that the squadron could finally be fully engaged in what had been its end: the attacks on England. KG 6 took part in Operation "Steinbock" where its losses were severe. This shortly before ‘Overlord’, the Normandy landings, which would also cut deep cuts in the numbers. Retreating "foot by foot", KG 6 fell back on the Reich before being dissolved in September 1944 because of its heavy losses. The squadron was to rise from its ashes, however, as KG (J) / 6, a fighter unit equipped with, among other things, Me 262 jet engines.
In the following months, KG (J) / 6 would experience the last upheavals of the Luftwaffe until the capitulation of the Third Reich, its numbers gradually shrinking. Its pilots nonetheless fought until early May 1945.

A book of more than 380 pages, embellished with 660 photos and 20 color profiles produced by Vincent Dhorne.

- Continuation of the series "history of the units" with this n ° 14 of Editions Lela Presse on the Kampfgeschwader 6 of the Luftwaffe.
This bombing unit did not know the start of the war since it was created in 1941 to harass England before being dispersed on several fronts.
Employing Ju 88s before moving to Ju 188, it was dissolved in September 1944 after having withdrawn into the territory of the Reich following the advance of the Allies after the landing in Normandy.
Recreated in the wake of Bf 109, Fw 190 and Me 262 jets as a KG 6 (J) / 6 fighter unit, it fought until the ultimate surrender of the Third Reich.
This book of 328 pages with flexible cover, makes us live chronologically by Staffel the life of this unit with its joys and its sorrows.
The iconography is really important with many views of details or in action, which may appeal to model makers.
We will also find 17 superb profiles of Vincent Dhorne, marvelously detailing the different livery characteristics of these bombers.
We will also find them in photos on close-up views.
The various operations in which the planes of this squadron took part are described and the end of this book lists the known losses, the airmen identified, then the recipients of the Ritterkreuzträger and the unit commanders in the form of appendices.
Truly comprehensive, like all books by this publisher, it is recommended for bomber and Luftwaffe enthusiasts. © small-tracks.org

- Volume 14 of Lela Presse's Unit History collection is devoted to a Luftwaffe bombing unit, and Belgian author Peter Taghon agrees, not really one of the best known. However, he manages to write up a 328-page unit history, so there is plenty to publish.
This bombing unit was born in October 1941, and will disappear in September 1944 but to be reborn as KG (J) / 6, a fighter unit equipped among others with Me 262. This part is also covered in the book.
The story is generally chronological, as Peter Taghon studies each Gruppe in turn, depending on the theaters of operation in which they are involved, and this sometimes generates flashbacks without hindering the general understanding of the subject. The book is broken down into 18 well-chosen chapters, 4 appendices (known losses, known personnel, recipients of the Knight's Cross, unit commanders). The last page gathers the acknowledgments, the bibliography and the sources.
As usual, a precise text is abundantly illustrated with black and white photographs, or sepia, of color documents, and by numerous profiles of Vincent Dhorne. The iconography represents both personnel and planes, and there are many images of KG 6 planes shot down on British soil.
The historical account is often supplemented by testimonies of old, published in italics, but also by elements of English origin, between the Ultra intelligence reports and the combat reports of the night fighters of the R.A.F. who fought the bombers of the KG 6.
Once again, this is serious work, in French, on a German unit admittedly less known than others, but which was based on French soil, which fought on very different fronts, among others in Normandy in the summer of 1944, all well produced and brought together in a heavy opus.
© Jocelyn Leclercq for Aérostories.

- With such a name, no wonder they took 4 years to train and put this unit into operation in the luftwaffe!
Here is the absolute counterexample in operational matters of a bombing group, with a dispersion on almost all possible fronts. The KG-6 has demonstrated a certain form of improvisation and an almost total lack of a global vision, to believe that all the organizational dummies were concentrated administratively ... and from that the KG-6 will hardly ever recover, except in the very last days of the war with modest means still existing then ...
The author who had a lot of courage to write this beautiful work dedicated entirely to KG-6 is called Peter Tagon and he realizes here an incredible reconstruction of all the logs of this singular unit, with a crowd of unpublished documents which are therefore for the first time united under the same label. A real treat for Luftwaffe enthusiasts because almost nothing has escaped the author's sagacity. We are here far from the "AS" but very close to the anonymous crews drowned in the mass.
A work of excellent quality as is the rule at Lela Presse, which will find its place of choice in any good library of convinced aerophiles. © Fleuves & Canaux

- Peter Taghon, whose previous work I had reviewed here. News Models July 2020 maintains the quality of his work on Luftwaffe units with this work on the KG 6. He therefore offers us a day-to-day history of each of the Gruppen of this unit which did not become truly active until mid-1942 but remained operational until the end. The diversity of constitution of KG 6 results in on the one hand, a text which may seem disjointed (KG 6 here covers bombing units, scouts to end up in the hunt!) But which, for model makers also translated by a great diversity of devices as we can judge by looking at the iconography:
Ju 88 A: 86
Ju 188 E: 48
Bf 109 G: 11
Me 262 A: 8
Ju 88 G: 2
Ju 86 P: 2
Me 210: 2
Do 217: 2
He 111: 2
Beaufighter: 2
Boston III: 1
Fw 190: 1
And regarding the color profiles (all based on photos):
Ju 188 E: 9
Ju 88A: 4
Me 262 A: 2
Do 217 E: 1
Ju 88 G: 1
(there are many more photos but these are mostly photos of people of less interest to model makers)
In particular for the model makers I would like to insist on the very beautiful photos of Ju 188 with original camouflages! They alone can justify the acquisition of the work.
Note also a very interesting chapter because the subject is rarely approached "in detail": the conversion of bombardment [KG6] to hunting [KG (J) 6].
The appendices are classic:
Known losses (werknummerns are generally known but not always AA + AA codes)
Known aviators of KG6
Ritterkreuzträger from KG6
· Unit commanders of KG6 / KG (J) 6
Conclusion: a fine book which reconstructs the (complex) history of KG6 and its various attached units. A must for Ju 88 fans and especially Ju 188 fans. © Modelstories 2021.