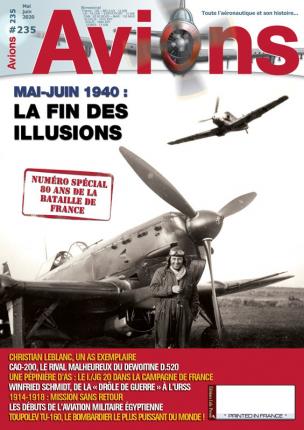 EDITORIAL - From one war to another ...

Incompetent leaders, a paralyzed government, tens of thousands dead, a total rout, does that remind you of anything?
But no, I'm not talking about the Coronavirus pandemic!
Come on, make an effort: France ridiculed by Germany, a trial that exonerates those responsible for any fault and, finally, the hero who stood up against the invader condemned to death, that still doesn't tell you anything?
No, I'm not talking about Doctor Didier Raoult but General de Gaulle, finally!

Eighty years ago, this great man - by any measure - did his honor for a country swept away in just over a month by the armies of the Third Reich. Our sister magazine Air Battles having devoted more than a dozen of its issues to draw up a detailed picture of the air battles of May-June 1940 [1], we have chosen to show you this campaign in an original way. Like the film "Stalingrad" by Jean-Jacques Annaud, you can follow the journey of some of the most valiant participants of both camps. Whether it is men (Leblanc and Schmidt), units (I./JG 20) or equipment (CAO-200), the observation is always the same: it is the best camp prepared who always emerges victorious from the confrontation.
On reflection, you may not be wrong, dear reader: there is indeed a connection between the events of 1940 and those of 2020 ...
I want to make it clear right away that I am not the author of the introduction of the article devoted to the ace Christian Leblanc! It is the sole responsibility of its author, that I take this opportunity to thank the confidence he has shown in the AIRCRAFT team for so many years.

If the confinement postponed by two months the publication of your magazine, it did not stop our dynamism because we published two books devoted to material carrying the three-colored cockades: "French Vampire and Mistral" (volume 1) and "The SA 330 Puma ”(t. 1), as well as a very interesting special issue devoted to the French Jets in Israel:“ Ouragan, Mystery and Super-Mystery with the Star of David ”. Three histories of famous German units also came out: "La Jagdgeschwader 54: The Eagles with the green heart of the Luftwaffe" (t. 2), "La Stukageschwader 2 'Immelmann'" (t. 2) and "La Lehrgeschwader 1, l 'Wing at the Griffon' (t. 2). Marine enthusiasts - there are also among the Fanas of aviation - will also be able to enjoy the books "The Imperial Russian Navy from 1870 to its fall" and "The battleships 'Samples'" (t.1: Brennus, Carnot , Charles Martel).

Summary of this issue 235:
- Christian Leblanc, an exemplary Ace.
- CAO-200, the unfortunate rival of the Dewoitine D.520.
- An Ace nursery: I./JG 20 in the French countryside.
- Winfried Schmidt, from the "Drôle de Guerre" to the USSR.
- 1914-1918: Mission without return.
- The beginnings of Egyptian military aviation.
- Tupolev TU-160, the most powerful bomber in the world!

We talk about it on the net and in the press:
- After the funny war and its share of swaggering, victory style on an armistice background, comes the time of the bad surprise and an awakening in the morning in May 40 a bit brutal, it was then the exodus under the bombs, the loss of reference marks and the hangover still that some did not want to remain the weapon with the foot while awaiting a prolonged stay in stalag and if the infantry made retreat in a hardly believable disorder, the men of the army of l were more than combative and the luftwaffe paid the price ...
- Back on a battle where honor was not an empty word via unpublished documents and a sense of breathless narrative as possible ...
- A monster from the Cold War far from peaceful warming, the TU-160 imposes its size and its chaotic history to perfection, the 160 looks good and proudly wears the red star on its fins, to be discovered without moderation ...
On this, to read the summary in the sense of the art of discovery and info and other background articles in variety and diversity ... Avions stands out once again by its content for the less eclectic ... © Marc Debeer - Fleuves & Canaux.