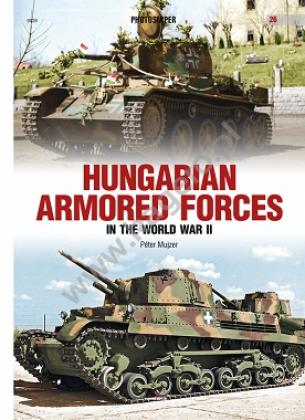 Since 1699, Hungary had been part of the Austrian Empire, ruled by the Habsburg dynasty. In 1848/49, the Hungarians staged an uprising seeking their independence, and although the attempt was crushed by the Austrians, it resulted in 1867 that Hungary being granted equal status with Austria. The empire became the dual monarchy of Austria and Hungary. It was known as the kaiserliche und königliche (k. und k.) Monarchy. The kaiserliche part referred to the Imperial throne of Austria, while the königliche part referred to the Royal throne of Hungary.
At the end of the First World War, Hungary, as a member of the k. und k. Monarchy, ended up on the losing side. Her army disintegrated and her armaments were either taken over or destroyed by the victorious Allied nations. In the autumn of 1919, after the failure of a short-lived Soviet-style republic, a new Hungarian National Army was organised under French supervision. This army was led by a former k. und k. admiral, the highest-ranking native Hungarian military officer, Admiral Miklós Horthy, who was later (in 1920) to become Regent of Hungary, ruling in place of the deposed Habsburgs. Hungary never officially renounced its status as a monarchy, and effectively the nation remained a monarchy without a king until the end of the Second World War.
After WWI, Hungary was in a very critical situation. In 1920 the Allied Powers gave the Hungarian delegation their conditions for peace. This agreement, the Treaty of Trianon, was very similar to the one already imposed on Germany at Versailles, and a French General was later to state that the only result was a twenty year long cease-fire, nothing more. The peace conditions for Hungary reduced the area of the country from 282,000 square kilometres to 93,000 square kilometres and the population from 18 million to 9.5 million. Thus 3,263,000 Hungarians became citizens of foreign countries under hostile administrations. The provisions of the Treaty of Trianon reduced Hungary’s 1914 industrial base by about 80%.
The Treaty of Trianon was a huge shock for the whole society. The Treaty has left a never ending scar on the Hungarian national consciousness.  Everybody was affected, at least emotional by the harsh conditions of the Treaty. Hungary had lost his imperial status and was reduced to a small country surrounded by hostile states.