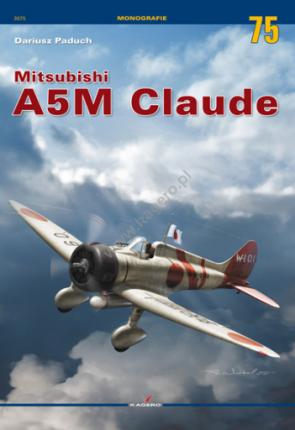 The mid-1930s saw the ever increasing numbers of fast monoplane fighters entering service with many of the world’s air forces.

This was not the case in naval aviation, where biplane designs still reigned supreme. One exception to the rule was the French Navy with its aircraft carrier Bearn and embarked Dewoitine D.371T1 fighters in parasol configuration, hardly a promising design for carrier-based aircraft. Prevalence of biplanes among naval fighters of the time was due to very strict limitations on landing speeds imposed by small flight decks of contemporary aircraft carriers. It was in the middle of that decade, in 1935, that the Mitsubishi A5M entered the stage – a low-wing, monoplane carrier-based fighter, which set new standards for aircraft of its class. Having said that, the Claude wasn’t the first fighter in this configuration designed for the Imperial Japanese Navy.

A5M was born
In the early 1930s the Imperial Japanese Navy Air Service underwent radical overhaul which included the launch of a special aircraft design development program, championed by admirals Matsuyama and Yamamoto. The program’s goal was to build an indigenous and fully independent aviation industry to fulfil the Navy’s needs following lessons learned in the Sino – Japanese conflict of 1932.

The first and foremost goal of the program (designated 7 Shi) was to deliver new designs for the IJN based on the technical requirements provided by Kaigun Koku Hombu in several basic categories of carrier-based aircraft: fighter, dive bomber, torpedo bomber and reconnaissance floatplane. Official requirements set the bar very high for new aircraft designs, which were expected to be superior to the most advanced machines in each category in service with foreign navies. In order to ensure success of the program, Japanese aviation industry received the highest priority status and generous government funding.
Required specifications for the carrier-based fighter under the 7 Shi program were as follows: maximum speed at 3,000 m – from 335 to 370 km/h; time to climb to 3,000 m – no more than four minutes; wingspan – not exceeding 10.25 m. The latter was dictated by the dimensions of aircraft elevators used on IJN carriers. The future aircraft was to be a successor to the Nakajima A1N fighter – the mainstay of the Japanese carrier aviation at the time. Nakajima and Mitsubishi were approached to submit their bids in the design competition, with the winner to receive a contract for a full-scale production.