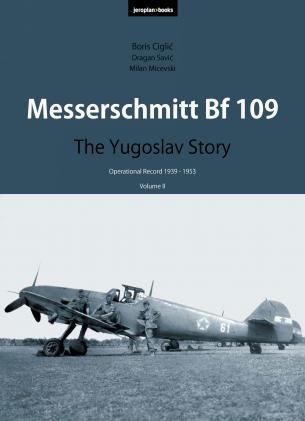 The iconic Messerschmitt Bf 109 roamed the skies over the Balkans for fourteen years with eight different air forces, while Yugoslav pilots flew it across the European continent, from the Bay of Biscay, over East Prussia and Ukrainian steppe, till the foothills of the Caucasus. This book is a sequel to the Volume I, which told the story of the best fighter in the inventory of the Royal Yugoslav Air Force, and a mainstay of the Luftwaffe fighters operating over Yugoslavia.
The first chapter in the Volume II follows in unprecedented detail the path of the Croat Air Force Legion fighter component, which fought on the Eastern Front both at the time of easy victories and against the overwhelming might of the Red Air Force as a part of the crack JG 52. Most of the actions of 15.(kroat.)/JG 52 have been paired with recently disclosed documents from Russian archives and for the first time, this provides an exceptional insight into the true combat value of the Croat Legionnaires and their Bf 109s.
A lot has been written about the Bf 109s in minor Axis countries, yet its short and inglorious line of duty in the Independent State of Croatia is almost unknown. Based on wealth of previously unpublished data and first hand accounts, the second chapter covers the acquisition and service of the most modern aircraft of the puppet Croat state and many incredible episodes from its service.
The changing fortunes of the Bulgarian airmen that flew the Bf 109 over Yugoslavia in their war against the USAAF and then the Germans is described in chapter three. Their actions and claims have been deeply researched and thorough¬¬¬¬ly cross-checked, both with Allied and German records.
Emergence of the Partisan guerrilla air force and its trophy fighters - a curiosity not seen in any other theatre of war - and the unexpected return of the German engineering masterpiece into the skies of the Yugoslav Republic in 1948 is chronicled in the fourth chapter. With young and inexperienced pilots at the controls of demanding and unforgiving fighter, the service of 77 aircraft was marked with incredible 120 accidents.
The final chapter explains in detail various camouflage patterns and markings applied on Bf 109s in Croat Air Force Legion, Independent State of Croatia, Bulgaria and Yugoslavia.
Comprehensive appendixes contain the most precise list of confirmed and unconfirmed victories and losses of Legionnaire Bf 109 pilots ever published; register of Croat Bf 109 losses; Bulgarian Bf 109 claims and losses over Yugoslavia, list of Bf 109s captured by the Luftwaffe at Skoplje after Bulgaria switched sides; register of Bf 109s in Yugoslav inventory with production numbers and previous service history, their accident log, list of 256 DB 605 engines in Yugoslav inventory; and detailed comparison of ranks.
Illustrated with 37 superb aircraft profiles and 255 photographs - the vast majority of which are published for the first time, 'Messerschmitt Bf 109: The Yugoslav Story (Volume II)' represents the result of decades of painstaking research. It is drawn from extensive archival sources, numerous interviews and personal recollections, as well as documents and artifacts from private collections in Serbia, Croatia, Slovenia, Bosnia and Herzegovina, Germany, Russia, Ukraine, Bulgaria, Czechia, South Africa, New Zealand, United States, United Kingdom, Belgium, Finland and Italy.