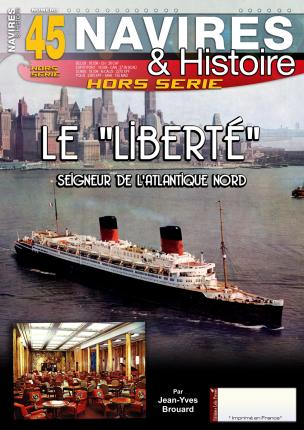 A curious journey is that of the liner Liberté, a former pre-war German luxury liner under the name Europa, ceded to France in 1946 for war damage. It served under the flag of the Compagnie Générale Transatlantique for ten years, between 1950 and 1961, alternating with the Île de France, another famous unit of the same Transat. They were among the most beautiful liners on the North Atlantic, renowned in particular for the quality of their cuisine. This special issue tells through detailed texts and copious iconography, the little-known history of this flagship of the French merchant navy.

- On the North Atlantic I would write your name Freedom!
You who were Europa under the Nazi regime and who rubbed shoulders with Normandy, Île-de-France and a few other princes and lords at the port of New York, were put to sleep for the duration of a second world war to then become a kind of currency of exchange of a fair return of things because it was then necessary to reimburse the losses in cash.
The Transat needed "new" ships, you joined this prestigious company to continue writing your story to the delight of passengers.
You certainly did not have the prestige of a NORMANDY nor the heroic aura of an Île-de-France, but you held your rank comfortably without any particular fuss, in fact you were a good liner, this for what you had been built.
Our quartermaster, specialist in commercial vessels, namely Jean-Yves Brouard, signs your biography with a generosity of details and information that puts us back on the forefront of Pier 88.
To read for a boarding without moderation via the travel agency of the past Lela Presse… © Marc Debeer - Fleuves & Canaux.