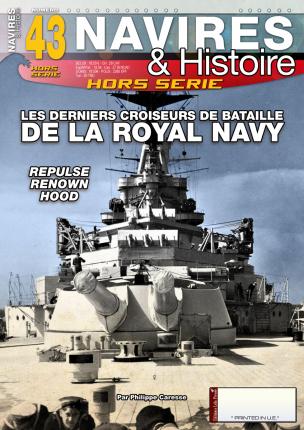 THE LAST BATTLE CRUISERS OF THE ROYAL NAVY

The First Lord of the Sea, Sir John Arbuthnot Fisher, can claim to be the true instigator of the battle cruiser in the Royal Navy. These fast and powerfully armed ships were very popular at the start of the First World War. The Battle of the Falklands, which took place in December 1914, proved their effectiveness against armored cruisers, but the Battle of Jutland demonstrated their weaknesses. The sheer speed of these ships and the heavy weaponry that equipped them came at a price: the sacrifice of protection.
On the eve of World War II, the Home Fleet had retained three of them, the most powerful. HMS Renown, Repulse and Hood made naval history in letters of blood during a conflict that was no longer theirs.
The text describes the genesis, the technical characteristics, as well as the history of these three battle cruisers; 187 photographs, 9 profiles, 3 color profiles, 6 maps and 11 plans complete it perfectly.

At the start of the war in 1939, they were three to be in service, at the end of the conflict there was only one left, because that was the price and the sacrifices to pay, it was 3 brothers with different characteristics and characters but armed by crews of great value who from the Atlantic to the Pacific via the Mediterranean were able to carry out their combat missions ...
So here are these three units grouped together in the same magazine which allows an extremely well documented parallel approach and carefully drafted by the renowned and aptly named Philippe Caresse who does not conceal any operational facts such as the hunt for Bismarck, Mers-el- Kebir, the flight from Singapore and so many others because it was by no means the cruise "that makes mumuse" quite the contrary ...
To be discovered from top to bottom in peacetime as in wartime, this triad will have known no real respite ... For enthusiasts of warships and the Royal Navy, this magazine must imperatively join the library ... ©Fleuves & Canaux