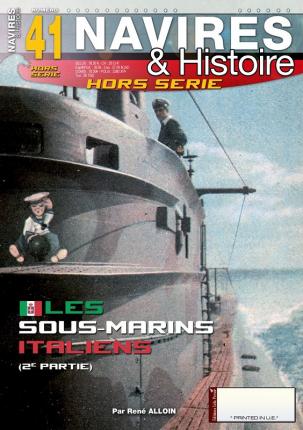 Here is the second part of this saga addressing the entire Italian submarine fleet that took part in the Second World War.
Each building in these classes is described there, along with all of the actions it has carried out and the results that have resulted.

- Double game in troubled waters ... They remained in the shadow of the Kriegsmarine and sailed in troubled waters changing flags according to alliances and misalliances, following changes of political-military course, of circumstance but remained faithful to the honor of their weapon ... The Italian submarines will have fought with bravery and panache without sparing their efforts and paying the price of blood like their German colleagues ... This special issue of the magazine Navires & histoire traces individual careers of these units which were engaged on the fronts of the Mediterranean and part of the North Atlantic and this since the Spanish Civil War without consideration or respite for the crews and the material which was not always up to the task given the number of series produced and of a limited quantity of units engaged, a real logistical headache in itself ... Quirky inventory of a submarine weapon quite unknown to the general public, richly illustrated and completed e by solid texts in great detail ... it is a series of very interesting and detailed documents that fills a void in submarine warfare ... to read and especially to discover ... © Marc Deber - Fleuves & Canaux.