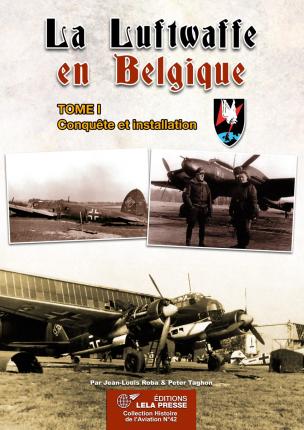 THE LUFTWAFFE IN BELGIUM. VOLUME I - Conquest and installation

DESCRIPTION:
From September 1939 and throughout the 'Funny War', the airspace of neutral Belgium was criss-crossed by belligerent aircraft taking advantage of the weakness of Military Aeronautics. German reconnaissance planes were thus able to identify future invasion routes. On May 10, 1940, the Wehrmacht entered the country and, until the end of that month, fighting raged in the Belgian sky, which had become a major strategic challenge for the invaders. With the withdrawal of the British expeditionary force, air engagements became rare (although still active in France) which allowed the Luftwaffe services to establish themselves very quickly in the country to restore the airfields as well as the military structures that could serve them.
After the French capitulation at the end of June 1940, Belgium experienced little daylight air combat, whether during the "Battle of Britain" or the "Non-Stop Offensive" in 1941, being 'protected' by the distance separating it from the RAF fighter bases. At most, ships and a few ports became the targets of the British air force.
On the other hand, Belgium was (like the Netherlands) on one of the direct routes taken by the aircraft of Bomber Command leaving at night to attack the factories of the Ruhr. Hence the rapid establishment in the country of night fighter units (Nachtjagd) which were to make a name for themselves (the famous 'Ghosts of Saint-Trond' feared by the crews of the RAF).
The period 1939-1942 was therefore contrasted with bloody fighting during the offensive in the west followed by relative tranquility in the Belgian skies only disturbed by a rise in power of Bomber Command. The few intrusions of the "heavy" Americans in 1942 remained "anecdotal" although harbingers of a growing threat.