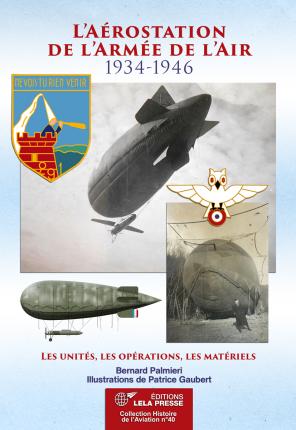 Few people know that in 1939-1940, 1,000 Air Force airmen took part in war operations against Germany: 49 observation companies were dedicated to large land units on the North and East fronts and 55 sections of protection balloons protected the capital, the major industrial sites and communication nodes, all over the territory. For the very first time, Bernard Palmieri details in this book the action of these unknown units, from the time of peace of the 20s-30s to the time of war, through their commitment on the ground, their equipment, their personnel and their badges.

With more than a hundred photos and documents reproduced, about 40 badges and about 8 color profiles.

NEWSPAPER :
For many enthusiasts, even aviation historians, the late 1930s and the Battle of France were plane fights! So the very title of this book is surprising because few people imagine what place still held the balloons in our defense. And yet ... Let us not forget that in 1939, and not only in France, many materials and tactics had changed little over the past twenty years, let us cite as an example the number of horse-drawn units.
We therefore discover through this book the importance of balloon units before the war and during the conflict with Germany. Even though the ballooning saw its units decrease during the twenties, it was restructured during the thirties to employ more than 10,000 balloonists in 1939. The equipment always seemed the same, obsolete with however the appearance of "motorcycle balloons" , equipped with a removable propellant nacelle resembling a fuselage.
Historian at the Historical Defense Service, Bernard Palmieri was sometimes surprised by original badges and, continuing his research he wanted to pay homage to this little-known branch of our air forces, to trace their engagement and their battles.
The first part of the book concerns observation ballooning, first between two wars, in mainland France and in the colonies, during the "funny war" (period of observation par excellence!) Then during the Battle of France. The last chapter shows how these missions almost reborn in 1945.
The second part, certainly less active but important, deals with defense balloons which, tactically arranged, prevented enemy air incursions.
Very well documented and precise, written in a very pleasant style, the text reflects the author's passion for his subject. The illustrations are very rich with a hundred well reproduced vintage photos, most of them unpublished, images of the badges and several profiles showing precisely the various types of balloons and the materials on the ground.
It is undoubtedly a major work on the history of aeronautics, not only a duty to remember but a remarkable and fascinating historical work on an unknown subject which finally finds its place. Lela Presse still offers us a very beautiful book as original as it is very well done.
J.-L. FOUQUET for Cocardes.