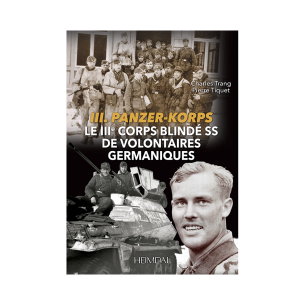 When Germany invaded Denmark, Norway, and later the Netherlands and Belgium in the spring of 1940, the Waffen SS opened recruiting offices there with mixed, if not poor, results. But when the Third Reich went to war with the Soviet Union, the 'crusade against Bolshevism' revived stagnating enthusiasm for recruiting. Four national legions, made up of 'Germanic' volunteers and placed under the command of Heinrich Himmler, were thus created and deployed on the Eastern front.

In the spring of 1943, these legions were disbanded and new SS formations were created, largely under the command of the 3rd SS Armored Corps composed of 'Germanic' volunteers, whose command was given to Felix Steiner, who had previously commanded the SS division 'Wiking', a unit also partly made up of 'Germanic' volunteers. This new corps, in which Himmler placed great political hopes, was sent to the Balkans, where it had the bitter experience of fighting against Tito's partisans, before joining the Eastern front, which it was not to no longer leave. The corps was terribly tested during the retreat from Oranienbaum and fought a battle full of sacrifices at Narva, where it forged a warrior reputation that impressed all of Europe. The Empire's propaganda departments used these defensive successes to symbolize the West's struggle against the 'barbarous hordes from Asia'. Estonians, Walloons and Flemings joined the III SS Corps in the terrible fighting in Estonia, followed by the retreat to Courland, the Battle of Pomerania which ended in heavy casualties and the hopeless struggle in and around Berlin .
More than any other volunteers who joined the Waffen SS during World War II, the 'Germanic' volunteers served the plans for the future European army that Himmler dreamed of.