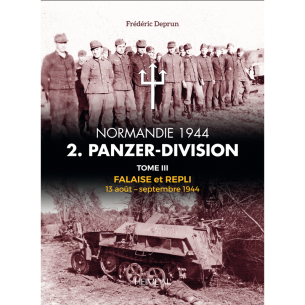 The final act of the 2. Panzer-Division's engagement in the Battle of Normandy begins on August 13, 1944 in Volume III of the three-part German Armored Unit series. The transfer between Alençon and Argentan puts the unit in a depletion of its fighting forces during a week of dramatic withdrawal. After the illusions of a counter-attack and the hopes of resistance in Normandy, Kommandeur von Lüttwitz must now avoid the annihilation of his Panzer-Division in the encirclement of the Falaise-Argentan Pocket. The losses of the unit on the banks of the Dives were heavy but the 2.Panzer-Division managed to escape from the Kessel to cross the Seine at the end of August 1944. A slow withdrawal began towards the German border. towards an essential reformation for a very weakened unit.
Frédéric Deprun, with this Volume III, Falaise et foldi, develops in 320 pages the chronology of the week of combat in the Falaise-Argentan pocket and the retreat routes to Rouen and Germany with the help of testimonies, maps and many unpublished photographs.