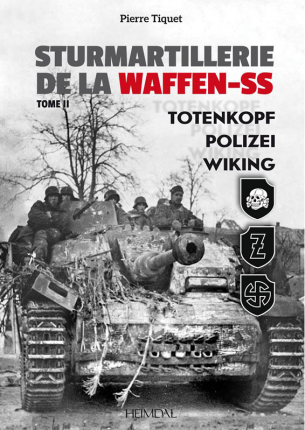 In this second volume on the Sturmgeschütze of the Waffen-SS, the reader will find the history of the "Totenkopf" assault guns, first articulated in a single battery, and later in a powerful Abteilung of three batteries. Plunged into the throes of the Demiansk pocket in the winter of 1941/42, the Sturmartilleristen almost continually experienced heavy fighting as far as Austria, in the spring of 1945, including those of Operation "Zitadelle" in July 1943 and Poland. the following summer. This part is particularly illustrated by a rich iconography thanks to the legacy of the Untersturmführer Jänisch or the Unterscharführer Mödlinger.
Belonging to a large, less prestigious, though very interesting unit, the assault guns of the "Polizei" division - a peculiarity, of the StuGs were found. IV -, accompanied by unpublished photographs, showing little-known engagements such as Greece or those of Banat and Hungary in the fall of 1944.
Finally, the StuGs. III of the "Wiking" which are illustrated, among other things, in the horror of the Cherkassy pocket.
Whether organized as a single battery, a formidable group, integrated into the armor, the tank destroyers or the Sturmartillery proper, the assault guns played an essential role in the fight against the Soviet armor. In addition to immersive photos and testimonials, the book also provides detailed biographies of aces and holders of the StuG Ritterkreuz. of these divisions, such as Berndt Lubich von Milovan, Ernst Dehmel, Richard Utgenannt, Hans-Georg Jessen or even Willy Hein.