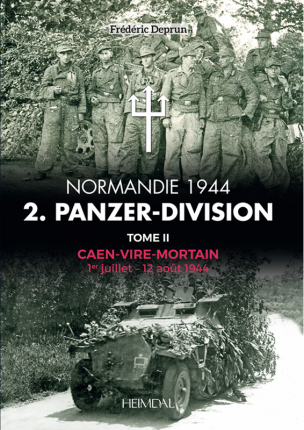 Volume II of the three-part series, addressing the fate of the 2. PanzerDivision in 1944 and the Battle of Normandy, traces the unit's combat period from July 1 to August 12.
Von Lüttwitz had to organize a war of position against the 1st US Infantry Division, at the foot of Caumont Ridge, and manage the deployment of these Panzer forces west and south of Caen against the British. But the defensive constraints of the German forces forced mobility and the Wiener Division must come to support the front line of Saint-Lô, which collapsed at the end of July 1944. The unit, weakened by these hard fighting, was engaged on August 6 as the main element of the German counter-attack in the direction of Avranches. Failure to advance in the Mortain area condemns the Panzergrenadiere to fierce resistance to avoid total collapse.
Frédéric Deprun, with the book 2. Panzer-Division, Tome II, Caen-Vire-Mortain - July 1-August 12, 1944, reproduces in 300 pages the atmosphere of the fighting in Normandy through hundreds of unpublished images, numerous maps and illustrations leading from the plains of Calvados to the gates of the Poche de Falaise-Argentan, for a volume III.