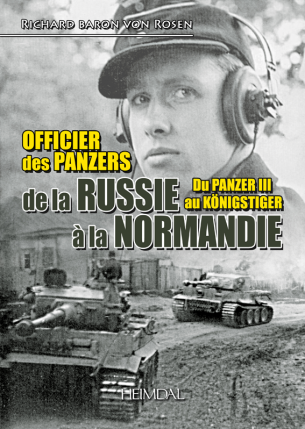 Friday September 1, 1939, young Richard von Rosen, seventeen, learned of Germany's entry into the war. He volunteered in October 1940 and joined the Panzer-Ersatz-Abteilung 35 where he had to submit to hard training in France, in the Bordeaux region, preparing him to become an officer. At the end of April 1941, still very young, he was Fahnenjunker (midshipman) then it was Operation Barbarossa, on June 22. He was a pointer in a Panzer III and fought in the USSR with the 4.Panzer-Division within the Central Army Group. It’s the tough fight for Stary Bychow’s bridge and he was badly injured shortly after.
After this first part of his military experience in the East, and his convalescence, he was transferred to the schwere Panzer-Abteilung 503. From January 1943, he was hired as tank commander on a Panzer VI "Tiger" , with whom he fought first in the Kalmuk steppe and then, as Leutnant and section chief in the 3rd company, he participated in Operation Zitadelle, the largest tank battle in history. His battalion was sent to Normandy after the landing, where he suffered the power of Allied bombing during Goodwood. It is partly re-equipped, at Sennelager, with powerful Tiger II; Baron von Rosen then commands a company of these fearsome Königstiger, a famous report immortalizes this takeover. In 1945, he suffered his fifth injury, thus ending the war.
Very different from the Tiger-Abteilung 503, historical work published in 2013 by Editions Heimdal, this is a text written in 2012 by Richard von Rosen, a very interesting self biography, illustrated with 450 photos and documents, in large unpublished part, of an officer who did his duty without having anything to reproach himself but who was tested by the consequences of the war. He joined the Bundeswehr after the war, becoming chief of staff of the allied forces at Fontainebleau (from 1964 to 1966), Kommandeur du Panzer-Bataillon 294 (1966-1970), de la Panzer-Brigade 21 (1972- 1976), military attaché at the German Embassy in Paris (1976-1980), German project manager with the French Forces in Germany, he will be friend of colonel Aubry, founder of the Armored Museum of Saumur and retired in 1982 with the rank of Generalmajor. An exceptional character, friend of France, who shares his exceptional experience as commander of panzers and with a company of Tiger II. Photographic documents allow us to follow it step by step, during four and a half years of fighting.
This 320-page book, with more than 450 illustrations, bound, in color, will be published in the form of two Historica of 128 pages each. The first will present his training and the Barbarossa fights, the second the engagement with the Tiger I and Tiger II. The bound version that we offer here will also include sixteen introductory pages and 48 pages for the latest battles, captivity and documents, or an additional 64 pages for the bound edition.