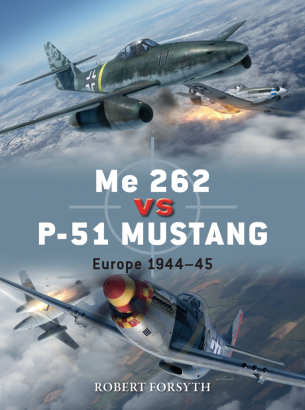 The Me 262 and the P-51 represent a pinnacle of design, performance and combat capability due to their respective flight power. With its operational debut in the summer of 1944 and powered by the Jumo 004 engine, the ME 262 exceeded anything the Allies possessed in firepower and speed.
However, the availability of the two machines as well as that of trained pilots became an insurmountable problem for the Luftwaffe. Meanwhile, the P-51, with its Rolls-Royce (Packard) Merlin engine and drop tanks allows the USAAF to have a combat aircraft capable of escorting its bombers deep into the Reich's airspace. , and to come back, and this for more than 1,700 kilometers. Much more, pushed to its limits, the P-51 was able to hold its own against the dreaded Me 262, despite the difference in power and speed limit. In fact, the Mustang would prove to the Luftwaffe craft that he would be his Nemesis (his doom).
This is the French version of an Osprey book, the first in a series.