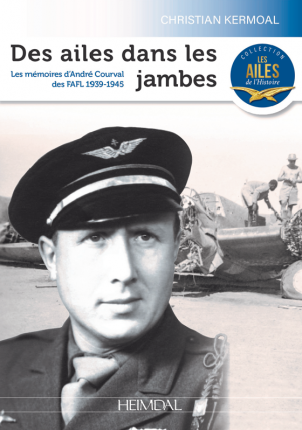 Editor's note:
Three escapes (Cherbourg, Carteret and Jersey), two crashes, injuries, desertion, a flight of 7,000 kilometers across Africa to find the fight: André Courval's war in the Free French Air Force is a perpetual one adventure. Told by the applicant, the six years of war in his Memoirs constitute rare testimony from non-commissioned personnel of the Free French Forces who served in a poorly known technical weapon: aerial bombardment.
Preceded by a section including his apprenticeship and his military service, the occupation, the flight by Jersey and then the arrival in England and his engagement in the Free French Air Force are particularly documented. André Courval's war in Saharan Africa is linked to the epic of Leclerc (Koufra, Fezzan, Libya ...) The two men crossed paths several times.
Present in September 1940 in Odiham, André Courval nom de guerre Saillard, was a pioneer of the GRB1 then of the Brittany group on Blenheim then Marauder. His war in black Africa, in Chad, in Tunisia, in Syria is that of the unsung heroes whose daily exploits he tells us about so useful for the affirmation of Free France. It precedes the reconquest of the national territory prepared in Algeria, part of Italy and completed from Provence to Alsace.
Embellished with original drawings by André Courval which illustrate his epic and photos and documents that belonged to the author, this edition is a richly annotated critical edition. It is presented, commented on and compared to those of two other Carteret volunteers who knew with him the risk of fleeing occupied France and won, with blood prices, the honor of fighting for his liberation.
It was prepared by Christian Kermoal, doctor of history, associate researcher at the Tempora laboratory at Rennes 2 University. It is a tribute to all these free men who have become warriors.