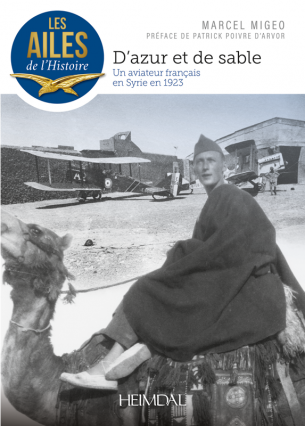 Editor's note:
Marcel Migeo is a great name from the heroic era of French aviation, even if he does not have the notoriety of a Mermoz, a Guillaumet, Saint-Exupéry, which he has also known all the three. Refusing a well-defined life as an official at the Ministry of Finance, he chose aviation out of a taste for adventure and travel. In January 1923, he left for Syria, assigned as a fighter pilot to the 53rd Levant squadron based at Deir-ez-zor. On Breguet XIV, he will take part in operations to "pacify" Syria, winning the Croix de Guerre and the Levant Medal with a bar.
Every day, he noted on his inseparable moleskin notebook the highlights of his daily life: air missions, his relations with the population, his discovery of the cities and landscape of Syria. These notes gave birth to a manuscript, unpublished until today.
Becoming an insurer in his hometown of Reims, Marcel Migeo has written ten books, the majority of which are devoted to aviation. We owe him war stories, such as Battles in the Sky (Literary Grand Prix of the Aero-Club of France) and biographies of Saint-Exupery, Henri Guillaumet, Maryse Bastie, and Didier Daurat. Almost a hundred years later, his writings on Syria take on a very particular and surprisingly current resonance, while this country has been torn apart for half a dozen years by a civil war which has taken on an international dimension.
The journalist and writer Patrick Poivre d'Arvor, too remonstrates, preface this work out of loyalty to the memory of Marcel Migeo, whom he knew and whose passionate youth stories are no stranger to the passion he developed , in turn, for the heroic times of aviation.