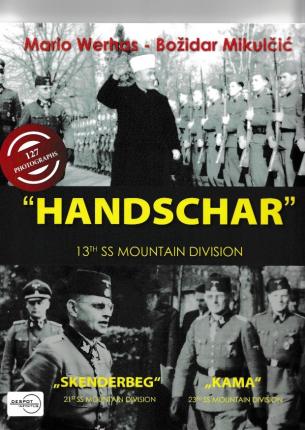 This book tells the story of the thousands of Bosnian Muslims who served in one of the most unique and notorious Waffen-SS divisions – the 13th Waffen Division of the SS Handschar.  Realizing the position of Bosnian Muslims in the war-torn Balkans was difficult, and being aware of the fact that some Muslims harbored pro-German sentiments, Reichsführer-SS Heinrich Himmler and SS-Obergruppenführer und General der Waffen-SS Gottlob Berger (head of the SS Main Office) approached Hitler in late 1942 with an idea to establish a Bosnian Muslim SS division. Werhas and Mikulcic describe the political circumstances in which the division was eventually established, the recruitment efforts, and especially the role Islam played in its foundation and everyday life. Himmler, who had been impressed by Bosnian-Herzegovinian soldiers in the Austro-Hungarian army in World War I, was fascinated by Islam and believed the enlisted Muslims would become fearless soldiers.  The authors also cover in great detail the combat operations in which the division participated: spending most of its existence fighting the Yugoslav Partisans in Bosnia, the SS Division Handschar developed a widespread reputation for brutality in battle. It also committed atrocities against Serbs and Jews.
The book – with 127 rare photographs from the U.S. National Archives and Records Administration – covers two more SS divisions with Muslim soldiers in the Balkans – the 23rd Waffen Division of the SS Kama and the 21st Waffen Division of the SS Skanderbeg. Both of these were formed in Albania and left a significant impact on that period of Albanian history, even though neither would ever reach full divisional strength. The circumstances of their establishment, however, and especially the importance of religion, are quite different when compared to the SS Division Handschar. With emphasis put on Albanian national sentiments rather on religious affiliation, the story of these two divisions is crucial to understanding an often-overlooked but important part of World War II in the Balkans.