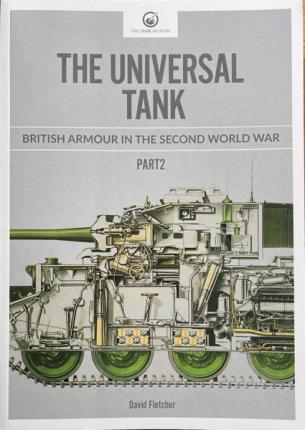 The Universal Tank. British Armour in the Second World War

David Fletcher continues his narrative from where The Great Tank Scandal left off with the débâcle on the beaches of Dieppe in August 1942, taking forward to 1945 the story of British and Commonwealth armoured fighting vehicle development.

For much of the war, the flawed system of British tank design and production had resulted in second-rate tanks that were mechanically unreliable, under-gunned and lacking sufficient amour. When General Montgomery took command of the Eighth Army in 1942 the ideal of a universal tank was first discussed. He could see that if one tank could be designed, which would fulfil most roles, it would simplify matters considerably. Yet it was to take until 1945, when the war in the West was almost won, before Britain began to redeem itself as an inspired, tank-designing nation.

Supported by a comprehensive selection of more than 100 contemporary photographs and technical drawings, David Fletcher draws on a variety of original archive sources to illustrate his compelling narrative, including the Regimental War Diaries of the Royal Armoured Corps, which have enabled him to get up close to the subject.