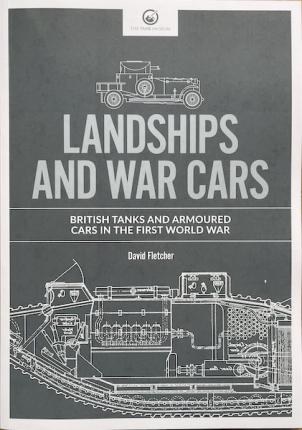 First published in 1984 and 1987 as companion volumes, David Fletcher’s Landships and War Cars have since become military classics, telling the stories of the birth and the coming of age of the tank and the armoured car in the First World War. They are republished here by The Tank Museum in this fully redesigned combined volume for a new audience of armour historians and enthusiasts.

In Landships, David Fletcher relates how the tank was conceived as an answer to a specific problem, the mass slaughter and stalemate of the trenches. Its development is described, from a primitive caterpillar tractor to a rapidly evolving weapon system. Every type of tank built for the British Army during this period is illustrated and described against the background of the battles in which they fought and the organisation that supported them. For good or ill, tanks changed the nature of warfare forever.

War Cars traces the genesis of the armoured car, from the earliest times to their emergence at the outbreak of the First World War when they began to prove their worth. The stalemate of the Western Front did not suit their mobility, but armoured cars fought with great success in nearly every other theatre of war that British troops were engaged in, from Egyptian sands to Russian snows and along the Indian Frontier. The origins of the motorcycle machine-gun units and the mobile anti-aircraft batteries which took part in the war are also explained, together with an account of how the sister nations of the Empire took to armoured warfare.

Illustrated with more than 250 photographs and profile drawings, Landships and War Cars also include tank technical data tables and a comprehensive listing of British and Commonwealth armoured car units worldwide in the First World War.