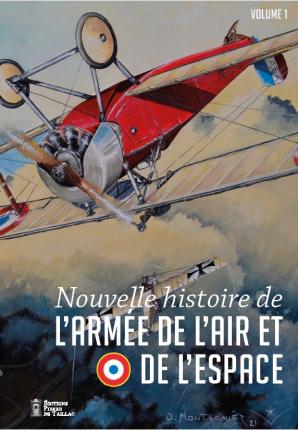 The Center for Strategic Aerospace Studies (CESA) is co-publishing with Éditions Pierre de Taillac a New History of the Air and Space Force. It succeeds the History of French Military Aviation published in 1980 by the Air Force Historical Service and the Air Museum, Editons Lavauzelle.

The ambition of this new book is to provide readers with an accessible and precise summary, in less than 500 pages, of the history of the Air Force and Space since the purchase of the first planes by the Ministry of War in 1909 until the extension of its action to outer space in 2020. The texts were written by a team of more than 50 contributors including historians from SHD, CReA and CESA , scholars and students. The book benefits from a very beautiful iconography made up of more than 750 photographs drawn from the collections of the SHD, the Air and Space Museum, the ECPAD and the SIRPA Air. It is further enhanced by some twenty paintings by air and space painters.

Printed in two versions, one with a soft cover intended for the general public and a two-volume boxed set for collectors, this New History of the Air and Space Force will be available in the spring. All the authors and artists who contributed to the work have waived their rights to the Air Force Social Works Foundation.