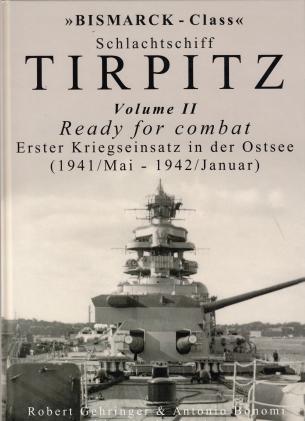 The second volume presented particular challenges with regard to specifying dates and locations, since the nearly four months
between April 01 and July 20 of 1941 needed to be reconstructed without the help of the TIRPITZ war diary almost seventy years
after the events. Therefore extensive archival work was necessary, and with the documents still in existence, such as war diaries
from ships and other naval bodies, it became possible to complete missing links and to shed some light onto the life of the TIRPITZ.
A further complication arose from the fact that the battleship was often located repeatedly at the same positions, which rendered
it difficult to place the photos in correct chronological order. The lengthy stay at the shipyard in Kiel had to be ordered, as well as
the numerous photos showing the ship at sea for which reference points allowing immediate conclusions were lacking. In such
tricky situations it became essential to pay attention to minute details on the ship, such as damage or paint irregularities on the
hull, specific elevations of AA guns or striking equipment details, such as the garbage chutes that were attached to the railing in
different combinations and locations. Such details made it possible to draw a link to photographic material for which the date had
already been confirmed, thus allowing unfamiliar photo to be placed in correct chronological order. In some cases even this was not
feasible, and there was no alternative but to provide an approximate time frame – e.g. a particular month – for one or other photo.

Every now and then, the weather log in the war diary was helpful in terms of wind direction, the state of the sea and weather conditions.
Since entries in the diary took place in the morning, they were only partly useful for the dating process, because the weather
could have changed during the day. Only lengthy periods under the influence of areas of low or high pressure were a fairly reliable
means for rendering datings likely or unlikely.
But the sun also provided assistance in fixing the date of photos – sometimes even accurate to a specific hour or minute. With the aid
of the ephemerides almanac (sun’s position in relation to season and the degrees of longitude/latitude) it was possible to determine
the height and azimuth angles needed to deduce the time of day. In theory, this appears fairly simple, but in reality the calculations
were difficult, since the dimensions of structural details were seldom known, and the lengths of shadows could only be defined when
they crossed the caulking lines of the wooden deck planks at right angles. Furthermore, external influences such as ship’s movements
due to swell or the trim of the ship or changes in course caused the ship to list, thus altering its alignment parallel to the horizon. For
these reasons, calculations such as these involved considerable effort and were only applied in cases in which a relatively authentic
and sound statement needed to be made with respect to the time of day determined.

In historic documentation of this kind, it is inevitable that symbols and symbolism typical of the time are made visible. However, it
would be an absolute misconception to deduce from this that the authors have any sympathy for Nazi ideology. The presentation of
such symbols in no way detracts from the fact that these sea-going steel giants as a means of power still hold a certain fascination,
despite the inhuman and political system behind them.