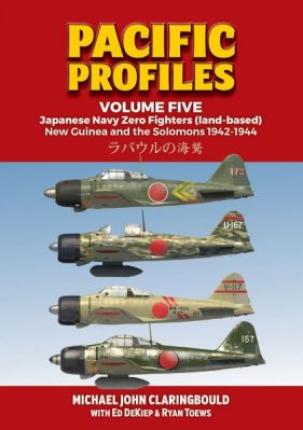 Volume Five of this Pacific Profiles series presents the most accurate colour profiles to date of Japanese Navy land based Zero fighters in the "South Seas" theatre: New Guinea, Rabaul and the Solomons.

Illustrated by unit are abundant examples of the varied markings, tail codes, leadership hallmarks and camouflage schemes which appeared on the thirteen Air Groups (Kokutai) operating in the theatre from February 1942 to February 1944. Each of the 101 profiles is supported by primary source material including colour photos, Japanese records, POW interrogations, technical reports, post-war wreck examinations and Allied intelligence summaries. These are accompanied by brief histories of each unit and notes on the changing nature of each unit's markings. How the late 1942 Japanese Navy restructure impacted these units is also clarified, along with the rationale and meaning of the ensuing multifaceted markings systems.

Never before have such accurate profiles been presented. Past errors are corrected, and many new markings including hokoku (patriotic) Kanji are presented for the first time. The author is world-renown for his expertise in respect to the Japanese aerial war in the Pacific.