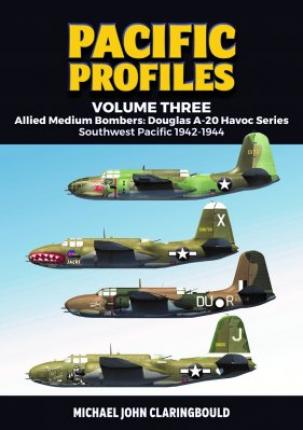 The Pacific Profiles series presents the most accurate WWII aircraft profiles to date of Japanese & Allied aircraft in the Pacific theatre.

Volume Three illustrates, by squadron, USAAF Fifth Air Force A-20 series medium bombers operating in New Guinea from July 1942 to the end of 1944. In this distant theatre, a dozen USAAF A-20 squadrons from the 3rd, 312th and 417th Bombardment Groups, joined by No. 22 Squadron, RAAF, used many variants of the A-20, mainly as strafers. Squadron insignia, camouflage, heraldry, nose art and command markings varied significantly between squadrons, giving a wide variety of colour schemes. The profiles, based on photos, diaries and other wide-ranging documents, are accompanied by brief histories of each unit and information on each aircraft profiled.

The author, Michael Claringbould, is world-renown for his expertise in respect to the A-20 in the Pacific, stemming from his direct involvement in locating and recovering one from New Guinea in 1984. These rare profiles, many appearing for the first time, accurately portray the A-20 during this captivating timeframe of the South Pacific air war.