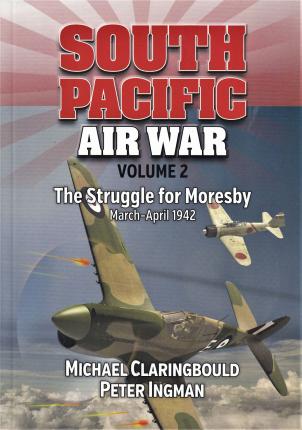 Note that an American reviewer has listed it as one of the best WWII books of 2018.  Details are here:  http://books.stonebooks.com/reviews/190113/

This second volume chronicles aerial warfare in the South Pacific for the two crucial months of March and April 1942 when a deadly struggle for Port Moresby played out. It can be read alone or as part of a trilogy that culminates in the Battle of the Coral Sea in May 1942.

The period begins with the stunning 10 March US Navy carrier strike against Lae and Salamaua, which caused the Japanese to pause their advance until their own carriers were available. Instead, they tried to grind the Allied forces at Port Moresby into submission through an unrelenting air assault by their Betty bombers and superlative Zero fighters.

After a long wait, Allied land-based fighters finally arrived in the form of Royal Australian Air Force No. 75 Squadron Kittyhawks. These were backed up by a growing collection of United States Army Air Force bombers, including A-24 Banshees, B-17 Flying Fortresses, B-25 Mitchells and B-26 Marauders (the latter two types making their worldwide combat debut over the skies of New Guinea).

Together, this motley force took the fight to the Japanese, resulting in a complex aerial campaign that saw units from both sides reach exhaustion. Never before has such a detailed chronicle of this air war been published, and for the first time the authors match Allied accounts with Japanese records. The result is both thrilling and surprising, with the resulting dispositions of the air forces of both sides setting the scene for the Battle of the Coral Sea in May.