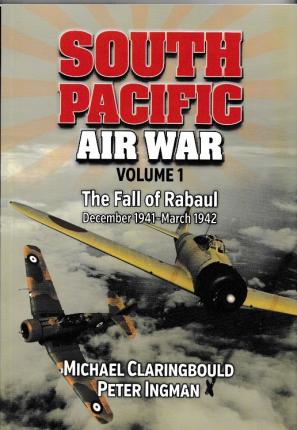 This volume chronicles aerial warfare in the South Pacific from December 1941 until March 1942, during which air operations by both sides became a daily occurrence.  As Imperial Japanese Navy flying boats and land-based bombers penetrated over vast distances, a few under-strength squadrons of the Royal Australian Air Force put up a spirited fight.

However it was the supreme power of aircraft carriers that had the biggest impact.  Four Japanese fleet carriers facilitated the capture of Rabaul over a devastating four-day period in January 1942. The following month, the USS Lexington’s fighter squadron VF-3 scored one of the most one-sided victories of the entire Pacific War.

By March 1942 the Japanese had landed on mainland New Guinea, and the scene was set for a race to control Port Moresby. This is the full story of both sides of an air war that could have been won by either incumbent, but for timing, crucial decisions and luck.

The two authors are uniquely qualified to tell this story.  Raised in Port Moresby, Michael Claringbould is a globally-acknowledged expert on the New Guinea air war and Japanese aviation in particular.  Peter Ingman is an acclaimed military history author specialising in the early Pacific War period.