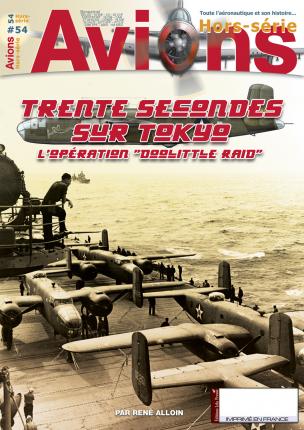 There are many iconic images from WWII. That of a North-American B-25 Mitchell bomber taking off from the deck of the American aircraft carrier USS Hornet (CV-8) to strike Japan, an operation known as the "Doolittle Raid" is one of the most evocative. This raid is the first bombardment carried out on the territory of Japan by sixteen B-25 bombers under the action of Lieutenant-Colonel James H. Doolittle responsible for leading this high-risk enterprise which must contradict the claims of the Japanese high command claiming the invulnerability of the archipelago.
Although the raid caused little damage, it was a huge psychological victory for the Americans, providing evidence of a possible retaliation, which will provide the Japanese with a disturbing vision of what Isoroku Yamamoto predicted when he announced: "I fear that all we have done is wake a sleeping giant and fill it with terrible resolve. "

Well the story is known, no suspense or ruffling scoop except that the subject was barely covered in French and the print quality is high (as always with this publisher). The result, which will appeal to model makers, is that Doolittle's B-25s are seen in a level of detail rarely seen. So we realize that these machines did not have a very fresh paint, with many scratches (see page 31, 33, 82). It even seems that some of the B-25s (at least the 40-2250) kept the colored front rings on their engines (probably blue from the 34th BS) (see page 23, 34, 82).
Apart from the B-25 (which we also see, which is rare, during training), we are also entitled to other devices (B-23, B-26, a type L blimp. , F4F, SBD, T-6, Ki 61, Ki 27, A5M, G4M). The B-25 remains the real star of this booklet (39 photos including 2 vintage colors - in the factory).
On the text side, the author describes Doolittle’s journey, the training and then the flights of each crew with "mugshots" of all the crew members.
And let's not forget the very beautiful profiles (9) which are not supported by convincing photos ... for the simple reason that many are reconstructions, based on oral testimonies (especially for the "nose-arts").
Conclusion: a very complete file (a small oversight in my opinion: there is nothing on the 1944 film!) On this particular mission. © Modelstories 2021