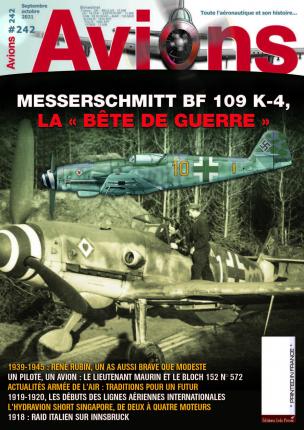 An exceptional number! Release August 20.
Editorial:
AVIONS attacks a legend from this issue. More exactly to the Bf 109 K, the latest offspring of the most famous - and most constructed - hunter line in the history of aviation: the Messerschmitt Bf 109! The devices used by the Luftwaffe at the end of the war are certainly those which are less well known due to the destruction of numerous archives; on this subject, see our article on the anti-tank Stuka in the spring of 1945 in AVIONS 239. The Bf 109 K is no exception, which still conceals many mysteries nearly eighty years after its creation. Who knows, for example, that the "Karl" was originally designed as a B-29 Superfortress interceptor? This unpublished information, and many others, will be detailed to you in the history of this extraordinary single-seater, a “bodybuilt” version of an airplane designed in 1935 but which still managed to compete with the best fighters in the world ten years more late ! Not shrinking from any sacrifice, we even managed to get Thierry Dekker out of his retirement to create new profiles, especially for you ...
The fame of this subject does not detract from the interest of the other AVIONS 242 articles, which they deal with 1914-1918 (SVA on Innsbruck), the interwar period (the beginning of international airlines , the Short Singapore seaplane), from 1939-1945 (the ace René Rubin, the Bloch 152 n ° 572) or the news, an article that I particularly recommend since it gives a complete update on the army Air today and tomorrow… in space. As I recommend to you our last publication, “from the Fieseler Fi 156 Storch to the Morane-Saulnier MS 500 Criquet” (available in October) and the n ° 2 of the magazine LES AILES which will be released on newsstands on September 24th. Good reading !

Summary of this N ° 242:
- Messerschmitt Bf 109 K-4, the “Beast of War”. First part, by Christophe Cony.
- A pilot, a plane: Lieutenant Maurin and Bloch 152 n ° 572. Full story, by Alain Coste.
- René Rubin, an ace as brave as he is modest. First part, by Jean-Jacques Leclercq.
- 1919-1920: the beginnings of international airlines. Britain is showing the way! Full story, by Stéphane Nicolaou.
- A new era for seaplanes, the Short Singapore. Third part: from two to four engines. By Geoffrey Bussy.
- 1918: raid on Innsbruck! The 1a Sezione SVA in Sovizzo. Full story, by Luigino Caliaro.
- News: French Air Force and Space. Traditions for a future. Full story, by Claude Archambault.
- Info-models and leisure. By Michel Ledet and Christophe Cony.

In front page :
Field of Neuruppin, north-west of Berlin, November 1944. The commander of 9./JG 77, ace Franz Menzel (8 victories), discusses with his mechanic in the cockpit of the Bf 109 K-4 «1 white ”that he has just perceived. "Ultimate" of the family of the famous Messerschmitt Bf 109, the K-4 however arrives too late to reverse the situation of a dying Third Reich ...