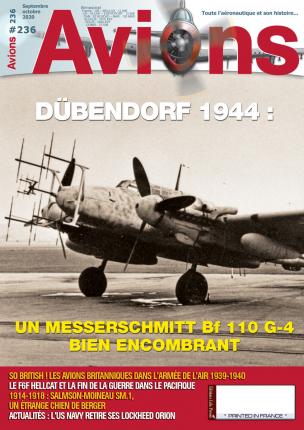 Summary of this N ° 236:
- Letters from the readers
- From Haguenau to Dübendorf: A very bulky Messerschmitt. Full story, by Christophe Gasztych.
- The Grumman F6F Hellcat and the end of the war in the Pacific. By Michel Ledet
- So British! 1939-1940, British airplanes in the Air Force. Full story, by Matthieu Comas.
- 1914-1918: Salmson-Moineau SM.1. The strange three-seater corps squadrons. Third and last part, by Christophe Cony.
- News: Lockheed Orion… Shining under all skies for more than 50 years! Full story, by Jan Bedrich.
- Info-leisure. By Michel Ledet and Christophe Cony

In front page :
"The Johnen Affair", or how a Nachjagdt ace delivered ultra-sensitive war material to a foreign power in April 1944 ...

Our readers are talking about it:

- Hello friends...
Finally, I find my usual AVIONS at my bookstore. it is 09/08/2020.
In these times of worry, even uncertainty, finding you reassures me. You are alive and well there! Hooray! As I hope you are all in good health, 'may not know.
Yes, I will find you and devour your first lines at my bookseller, not because I'm too lazy to subscribe, no no, but quite simply because the bookseller is really pretty and it's been years since is my little monthly secret crush. (and bi-monthly by you)
Certainly, just like me, she displays a few terminals on the meter, but what a joy to see her pull out from under her counter the magazines that she took care to keep for me alone and that she hands me with a smile that I am alone To taste ?. Small guilty solitary pleasure while at the same time peeping out of the corner of his eye, the Dédé, a former railwayman who came to seek his "freed". Especially when your cover is adorned with a cockade! I do GRAVE!
Friends of AVIONS, believe in the immense joy that I have to read to you with each publication. I'm sure I'm not the only one, but who today can be sure of tomorrow?
Continue to rejoice me (and even from the simple contact of your magazine), because this month of September seems to be a good and very beautiful vintage. (You think! Of the 110 night hunting)
For once, I'm going to order volume 2 on the Mistrals / Vampires. Because volume 1, much more than an appetizer, really opened my appetite. Like many of your publications' must say ...
You may not know, dear Planes, what I like to read to you. Be well, I kiss you from the heart. © Laurent D.


- Just an email to congratulate you on your magazines and particularly for the fascinating series of articles on the Salmson-Sparrow, exemplary by its research, its richness and its details. I take this opportunity to thank you also because the last article in the September-October issue allowed us to finally put a story behind some photos on which my great-grandfather appeared, who was then a Republican Guard. My grandmother, born in 1919 and who had these photos, did not know their history or what was the trial in which her father had participated. It therefore took more than 100 years for a caption to be added to the back of these photos when, reading page 63 of Airplanes, I recognized his face in the top photo.
Best regards and wishing long life to your publications. © Rémi R.

This new issue begins with this big file on the Johnen affair and the accidental landing of a Bf110 G-4 at Dübendorf in Switzerland.
This is the opportunity to admire some detail views but also some photos of the Swiss BF109 G-6s.
The Hellcat saga under the colors of the US Navy continues with this game beginning in June 45 in the Pacific.
Big file still rather original on the civil planes of British origin which were found in the inventory of the French forces until the capitulation, then in AFN in the Levant. Terribly sexy under beautiful camouflages as we knew how to do at the time before for some to end up with a German cross!
Small return to the 1st world war and the last very documented article on the Salmson-Moineau SM.1. We are entitled to good views of details and even a complete 1/72 plan!
The last article dealing with modern aviation covers the P-3 Orion from its origins to the last examples in use.
As you can see, there is something for everyone with subjects treated sometimes over time but always seriously and with many illustrations and that's what we love! © Christophe Verdoux. For master194.com, fighters.forumactif.com & www.small-tracks.org.