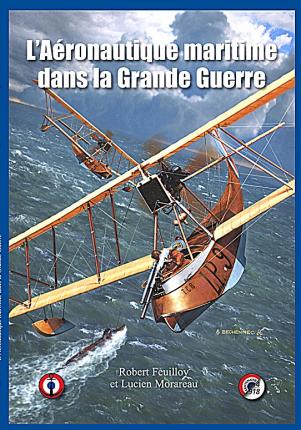 This book results from the grouping of the five successive annual papers edited by the ARDHAN from 2014 to 2018, with the support of the commission of the centenary of the Great War.
It replaces opportunely the book ARDHAN n ° 10, published in 1999, now exhausted, whose subject was limited to the French Maritime Aviation during the Great War. This time, all of Maritime Aeronautics is covered by its two components: Marine Aviation (heavier than air) and Aérostation Maritime (lighter than air).
At the beginning of the war, Marine Aviation is very modest. It has 26 pilots and 14 seaplanes. Two squadrons were set up in Bonifacio in August and in Nice from August to November, to monitor the attitude of the Italian forces whose neutrality is vacillating. A Nieuport squadron was sent to Port Said, in November 1914 leading up to April 1916, missions along the coasts of Palestine and the Red Sea, to monitor and attack the Turkish forces threatening the Suez Canal. In January 1915, two squadrons were created at Dunkirk. They cooperate with the Military Aviation on the Flanders front. At the request of Italy, a squadron of seaplanes was installed in June 1915 in Venice and she intervened several times against Austrian ships and submarines, until April 1917.
The Aérostation maritime receives its first airships in December 1915. They are responsible for fighting submarines, in cooperation with seaplanes. The airships of the Army are transferred to the Navy in 1916 and 1917. As for the captive balloons, equipped with a nacelle of observation and towed by small buildings, they appear in April 1917 and are in charge of the marking of mines in zone coastal.
It is from 1917 that Maritime Aeronautics will develop considerably in the fight against submarines. The German submarines constitute for France and its allies a very serious threat, so that the Minister of Marine creates, in June 1917, a General Directorate of the submarine war to which are subordinated all the naval and air means contributing to the fight against enemy submarines. Numerous centers of seaplanes, airships and captive balloons were then installed along the coasts of France and North Africa, Greece, Portugal and even Dakar.
At the end of the war, the Maritime Aviation lines up about 700 FBA, Donnet-Denhaut, Tellier, Georges Lévy and Hanriot seaplanes, not counting several hundred others in reserve. Altogether Marine Aviation will have received nearly 3,000 aircraft from 1910 to 1918. They are distributed in 36 centers with auxiliary combat stations. Aérostation Maritime has more than 200 captive balloons in service in 18 centers and 37 airships in 12 centers. Maritime Flying personnel include 650 pilots and 700 floatplane and airplanes observers, and Aerostation consists of 100 airship pilots and 500 airships on airships or captives.
All of the Maritime Aerospace centers employ 11,000 seafarers, or 7% of the Navy's workforce. Maritime Aeronautics has considerably hampered enemy submarine action and has been a real success. This is his first contribution to victory.