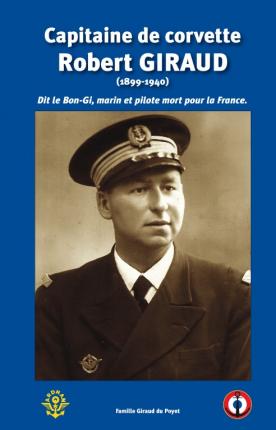 For sailors of the second half of the twentieth century, the name of Commander Robert Giraud evokes the building that served from 1947 to 1977. First, aviation tender carrying seaplanes in Indochina, then aviso based in Diego-Suarez de From 1956 to 1963, he finished his career in Toulon and Lorient as an underwater intervention vessel.
This book attempts to trace the career of Lieutenant Commander Robert Giraud du Poyet, born in 1899, who entered the Naval Academy in 1918, in the Maritime Aviation in 1924 as an observer and pilot in 1925. It serves in Rochefort, Saint -Raphael, Berre, Istres, Hourtin, and Karouba, returned to general service in 1931, as a gunner on the destroyer Lynx and then professor at the Naval Academy. He commanded the 4T1 squadron on Latécoère 290 at Berre in 1935-1937, created an aerial photography service at the Navy Staff and was appointed in June 1939 as an officer and then second in command of the destroyer Bison under the orders of Captain Bouan. The ship sails from Lorient to Dakar and then participates in the Norwegian campaign in the spring of 1940. It is off Namsos that it undergoes,
May 3, 1940, an air attack of Junkers 87 Stuka which will be fatal to the ship. The Bison is cut in two by an explosion. On a crew of 263 men, 139 will be killed or disappeared.
Lieutenant-Commander Robert Giraud is among the victims, as is Captain Bouan.
These victims are entitled to the mention Death for France.
Robert Giraud has distinguished himself many times in rescue operations, especially to help the battleship France's crew in 1922 and three times to save men from damaged seaplanes. He himself suffered in 1930, a memorable drift in
sea ??of ??44 hours aboard a CAMS 37 of Karouba, failing and seriously injuring himself on a rocky coast in Sardinia.
His natural kindness, his sense of camaraderie, his courage and dedication earned him the nickname of Bon Gi, for good Giraud, without being detrimental to his namesake Paul Giraud, pilot officer six years his junior.
Robert Giraud married in 1927 to Elisabeth Dupond. They had three children: Anne-Marie in 1928, Françoise in 1930, died in 1996 and Philippe in 1934.