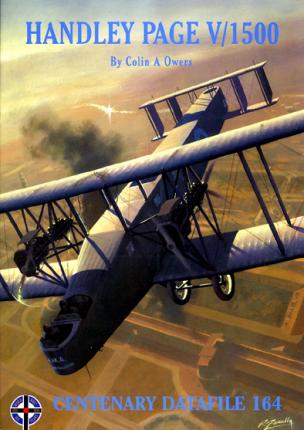 Making a great addition to the Datafile series is Colin Owers' study of the enormous four-engined  Handley Page V/1500 bomber of WWI. This Royal Air Force behemoth was all set to make a series of raids on Berlin in late 1918 but with the signing of the Armistice the eager crews were stood down. Colin has the full story of the bomber's career in depth ,with the aid of over 60 photos,contemporary sketches and detailed appendices. Ronny Bar contributes six fabulous  new colour profiles that dominate the inner and rear covers,whilst Robero Zanella depicts a dramatic post war bombing raid on the front. Due to the Handley's great size ,we have been unable to include the usual 1:48 scale drawings this time but Martin Digmayer's all-new 1:72 scale plans are more than sufficient to convey the mammoth proportions of the RAF's first ever 'heavy bomber'...Another classic title for this long-running series.