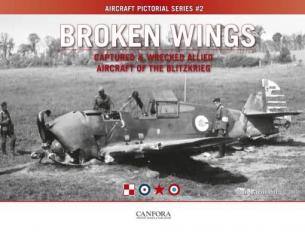 Broken Wings is Tom Laemlein’s second volume in Canfora’s Aircraft Pictorial Series. Over 176-pages the book presents almost 250-photos of Allied aircraft that fell into the hands of advancing German forces in the early years of World War Two. These photographs provide an opportunity to study the machines in detail and are an ideal reference or inspiration for aircraft and diorama modellers alike.