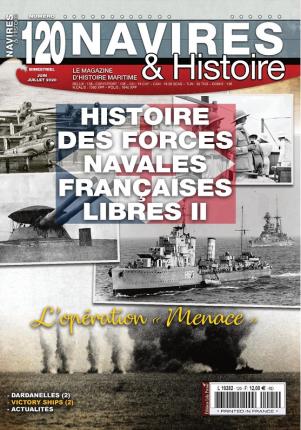 We talk about it in the Press and on the Net:

- Only three articles in this issue, but three very solid articles. The second part of Frédéric Stahl's study on the Free French Naval Forces covers the period from September 1940 to September 1941 in more than thirty pages, with a large place given to the history of "Force M" and of operation on Dakar, almost minute by minute. In twenty-five pages, René Alloin offers us the second part of his study, just as detailed for the role of each vessel (including submarines), on the Dardanelles operation in 1915. Finally, the second part also for Jean-Yves Brouard's study on the Victory Ships of 1945 and their very varied fate (s) after the end of the war.
A number rich in information, served by an abundant iconography. Indisputably to keep. © Rémy Porte - Guerres et Conflits.

-  In terms of the French navy in wartime (the second!) It was such political and military chaos that we still wonder today how the so-called navy could overcome such a division. The accumulation of resentment, hatred, different political opinions, currents of thought and doctrines of employment damn damned the morale of the "royal", the fratricidal battles between each other, between Gaullists and pétainistes and other fractions were anything but castagne de cite ... it was murderous as possible and without real desires not to fight it, a story passed almost in silence or almost ... To be discovered without moderation ...
The continuation of the excellent series dedicated to class V cargo ships like Victory, bigger than the famous Liberty, also faster and much more efficient but a little forgotten, a fabulous article on unknown boats ...
For the rest, battle between land and sea at the Dardanelles, news, info, news and take your time to savor the reading of a reference naval history magazine ... © Marc Debeer - Fleuves & Canaux.