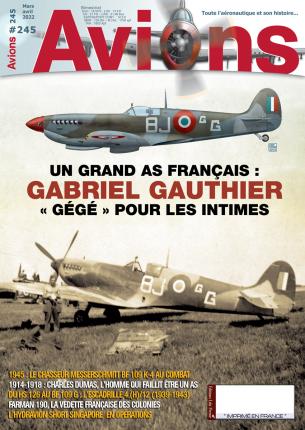 - A great French ace of the Second World War: Gabriel Gauthier, "Gégé" for close friends. First part, by Jean-Jacques Leclercq.
- Messerschmitt Bf 109 K-4, the “Beast of War”. Fourth and last part: to the end on the Eastern front. By Christophe Cony.
- Charles Dumas: the man who almost became an ace. Full story, by Christophe Cony.
- From Henschel Hs 126 to Messerschmitt Bf 109 G: Squadron 4.(H)/12 (1939-1943). Complete story, by Jean-Louis Roba.
- The Farman 190, star of the colonies (6). By Franck Roumy, with the participation of Michel Barrière.
- A new era for seaplanes: The Short Singapore. Fifth part, by Geoffrey Bussy.
- Info-models and leisure. By Michel Ledet, Jacques Druel and Claude Archambault.

We've been bending over backwards for months, cutting back on our margin. An already tight margin that cannot be reduced for long. The decision taken today does not delight us, but we must necessarily pass on this increase in our prices, our economic balance depends on it. A choice that can be explained by the soaring price of paper for months.

It has now been twelve years since our rates have been increased, unlike many other sectors. We wanted to spare you, not touch your wallet. Today, we no longer have a choice and we sincerely regret it. The price of your magazine will take 8%, it now goes to 13.00 euros.

The LELA PRESSE Team is counting on your understanding and support in these difficult times. We do not give in to panic… Especially not! It would be the worst thing to do. "Keeping a cool head when the boat is rocking is the best way to weather a storm."

We also learned with sadness of the death on December 25 of Vital Ferry, one of the great historians of French civil aviation. Air traffic controller in Martinique then in Madagascar in the immediate post-war period, aerodrome commander in Indochina in 1954 then in New Caledonia in 1956, he ended his career in 1990 at the General Directorate of Civil Aviation . Familiar with the archives of the DGAC and the Air and Space Museum like his friend Robert Espérou, Vital Ferry was a regular contributor to the Trait d’union and the review ICARE. In addition to numerous articles in these journals, we owe him excellent works on subjects that are often poorly understood, such as Popular Aviation in 1936, the Belgian and French air forces in Africa from the beginning to 1940, the airmen of Free France or the transport air in French-speaking black Africa (1940-1961). We extend our sincere condolences to his family and loved ones.