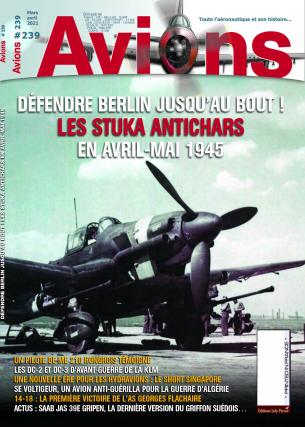 "The real conquests, the only ones which give no regrets, are those made out of ignorance" © Napoleon Bonaparte.

Here is a maxim to ponder if we judge by the very rich content of this issue of AVIONS: seven articles, all unpublished! Andrew Arthy proves to us with his study of the Ju 87 G in 1945 that it is still possible to unearth news about the operations of the Luftwaffe at the end of the war; Jean-Louis Roba introduces us to the company which revolutionized European air transport in the mid-thirties with its Douglas DC-2 and then DC-3 [1]; Emmanuel Corris offers the exceptional testimony of one of the last Hungarian pilots of the Second World War, who in April 1944 intercepted the USAAF B-24s at the controls of his Me 210; Geoffrey Bussy, Joël Mesnard and Stéphane Nicolaou present three astonishing aircraft respectively: the British hydroplane Short Singapore, the French twin-engine anti-guerrilla SE Voltigeur and the Swedish multi-role fighter SAAB JAS 39E Gripen. And finally, the editor invites you to find out a little more about the first victim of the future 14-18 ace Georges Flachaire ...

[1] Do not miss the second part, which will go until 1945 by also dealing with the fate of the KLM planes incorporated simultaneously in the BOAC and the Lufthansa at war ...

In front page :
A Ju 87 G-2 captured by US forces in May 1945. With its two 37mm guns, this anti-tank variant of the Stuka successfully fought Soviet vehicles and armor until the end of the war. (USAF)

Slow, sluggish, poorly armed, based on a principle of war which will very quickly be obsolete but will last throughout World War II, the Junker JU-87 Stuka (in short) or Sturzkampfflugzeug (in full) goes very quickly to be overwhelmed because he was so vulnerable, except that he will prove to be almost indispensable on the Eastern Front in particular where he will play a leading role ... and he who had known the first hours of the war will in a way, to end them in a last stand as the most formidable tank breaker with its 2 20mm guns under the wings ... The "stuk" goes into the hands of experienced pilots to become the terror of the Russians ...
It was at the command of a JU-87 that officiated Hans Rudel, pilot emeritus and holder of the large number of combat missions plan of the second war, a sacred character in himself who despite the amputation of a leg continued the fight until the last day ... This is roughly what is told in a poignant and edifying article ... a subject approached with respect and which says a lot about one facet of conflict ...
In a completely different register, the history of the DC.2 DC.3 of the KLM before the war or how the legend of the Douglas began not without breakage and pain in Europe, commercial aviation took there its real development which was somewhat put badly by the second war ... The KLM was one of the very big actors of its sector well ahead of AIR FRANCE and thanks to the personality of Albert Pelsman a "boss" at the forefront with a strong character. ... Beautiful document which perfectly illustrates the real challenges of aviation at the time ...
For the rest, read the summary as it contains a wealth of information and without counterfeiting, AVIONS stands out and will occupy a lot of time by reading your confined activities ... Happy and healthy reading and see you in the next issue. ©Fleuves&Canaux