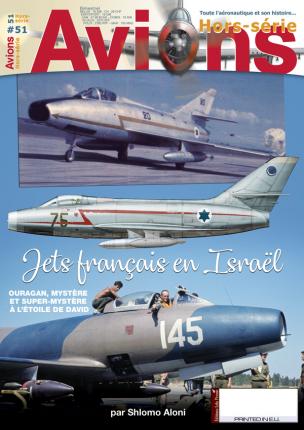 If the Israeli combat aviation is currently equipped with American equipment, it was quite different during the 50s, 60s and 70s! These decades were indeed marked by the seal of Marcel Dassault. The young Israeli air force, having to face many "unfriendly" countries, then bought almost all of its combat aircraft from the French aircraft manufacturer. This is how Hurricane, Mystery and Super-Mystery (and later the Mirage III) formed the strike force of the Israeli combat aircraft. The latter used them in the best way, winning victory after victory during the multiple conflicts that struck this region of the world.
Shlomo Aloni offers us with this special edition an excellent synthesis of the history of these FRENCH JETS marked with the star of David, embellished with many photos and completed by the superb color profiles of Vincent Dhorne.

We talk in the Press and on the Net:

- Israel was one of Avions Marcel Dassault's best customers from its inception. The author offers here the story of these devices (Hurricane, Mystery and Super-Mystery ... maybe there will be a future HS on the Mirage?) In the Heyl Ha’Avir.
The author deals with the whole process: the choice of the device, the conveying operations, the training and finally the operations. All these stages are described in detail with government hesitation on orders, problems with the conveyance, doubts about the results of air combat, criticism of the military on the aircraft. This is presented without make-up, clearly showing the doubts that may exist at all levels, including in the case of missions that could be described as "psychological warfare" which were to prove Israeli superiority ... and did not prove it because of the results. unsure of the fighting.
This beautiful historic work is also timely for model builders with the recent release of an SM-B2 at 1/72 at AZUR! © Modelstories2020.

- Written by Shlomo Aloni, this Special Edition Avions n ° 51 deals with French fighter planes in Israeli colors between 1955 and 1975.
Very well documented in terms of photographs with many detailed views as well as others taken on tarmacs in Israel, there are also 25 large profiles.
The text gives useful information on this period with some maps to locate the actions.
Perfect companion for the latest SMB2 Sa'ar duo pack from Special Hobby, it will certainly make you want to make some models bearing the Star of David. Highly recommended ! © Chistophe Verdoux for the Master-194, Small-Tracks and Fighters-Forumatifs forums.

- A classic jet concert in the land of Israel, a concert of virtuoso who had to agree to form beautiful multipurpose aerial formations in constant evolution sometimes quite far from the basic modus operandi or how to surprise and damn destabilize the forces of the opposing camps. ..
A trio born at Dassault and acquired a little constrained and forced for lack of other things available on the technical level with the bonus of imbroglios in the embargoes, the Middle East being an ultra sensitive terrain both on the military and diplomatic plan ... The jet trio of the first and second generation found there a vast field of action to be able in the hands of pilots very "go inside" to express themselves in total freedom or almost even leaving a few feathers in passing but in keeping the honor of the star of David, something which through minor and major conflicts that experienced (and still knows) the region was commonplace ... and in this area our friend Shlomo Aloni knew how to decipher and dissect the person knot bag history of the H'eil Ha'Avir Ha'Isreli (Israeli Air Force) known for its taste for secrets and its historical smoke ... A bet won with the content of this magazine which sheds light on the underside of the years beginnings and evolution of an air force which today is among the best in the world ...
Photos, illustrations in color, planes in all versions and text in information, you can inform yourself quietly the hawks watch over your readings ... © Marc DEBEER - Fleuves & Canaux.

- For a few years, we have been able to find a good number of works on devices produced by France after the war and in particular from the 1950s and the beginning of the era of jets.
Besides the use under our own roundels, it is less frequent to see writings on French material used by foreign air forces.
This new issue HS of Avions is a good example, since it deals with Hurricane, Mystery IVA and Super Mystery which were used by the Israeli aviation between the middle of the Fifties and the beginning of the Seventies. Although the subject main in the use of planes, the author gives us very interesting information on the geopolitical context of the time and on the relationships
different arms suppliers and Israel.
Of course, and one suspects it, the use in operations and in combat is widely developed there with
many very lively testimonies of pilots whose names are very often noted in legends of
texts or photos. Very well illustrated with photos, many of which seem unpublished, this
number is enriched with 24 superb full-page color profiles, signed by Vincent Dhorne, a very good reference. Even if it is not mentioned on the cover of this HS, it is a
volume 1, volume 2 is planned; this time it will cover the Vulture and the Mirage III. We will then have a very good document on the use of French aircraft under the Star of David. © Régis BIAUX - LE TRAIT D'UNION.

- Find ! Written by Shlomo Aloni, this book (Hors-série Avions n ° 51) deals with French fighter planes in Israeli colors between 1955 and 1975.
Very well documented in terms of photographs with many detailed views as well as others taken on tarmacs in Israel, there are also 25 large profiles.
The text gives useful information on this period with some maps to locate the actions.
Perfect companion for the latest SMB2 Sa'ar duo pack from Special Hobby, it will certainly make you want to make some models bearing the Star of David.
Highly recommended ! © Christophe Verdoux for Master194 / Smal-tracks.org / Fighters.forumactif.com.

- The HS of our friends from Lela Presse are generally of excellent quality and this one is no different, especially since the subject is dear to French enthusiasts. The relationship between France and the Hebrew State has always been complicated, but it was in good shape during the second half of the 1950s, when our country was happy to place its fighters (to replace the aging British planes), to the detriment of the American F-86 or Swedish J29. The “honeymoon” lasted from 1955 to 1967, a dozen years during which France was a privileged supplier of hunters to Israel, against the backdrop of open conflicts (1956 and 1967) or hiding, with iron the Hurricanes (73 in service from 1955 to 1973), Mystère IVA (61 between 1956 and 1971) and Sembed (SMB.2, 58 from 1958 to 1971) which are treated in this first volume.
Aloni does not just describe here the deliveries and operations of French jets under the Star of David, he enters the mysteries of diplomacy and geopolitics and highlights the permanent complications surrounding the contracts for these planes.
Extracts from reports and testimonies complete a rich and very informative text, accompanied by a superb photo selection, including many new or little known, and especially by 24 formidable often full-page profiles signed Vincent Dhorne, which will delight model builders.
Very clearly, there is something to please a lot of people in this special issue which helps to further clarify the career of our hunters in Israel. We can't wait for the Mirage III and Vautour sequel! © Sam Pretat - COCARDES

Here is a special edition that will satisfy fans of Israeli hunting in the heyday of French jets. If the first studies on this subject were often marked by a certain bias, the authors became more rigorous and factual while the opening of the archives made it possible to come out of the fantasy. This is undoubtedly one of the characteristics of this publication which begins by taking us in the arcana of the contracts which see the seventy-three Hurricanes instead of the Mystery II initially planned. Based on numerous testimonies and press articles, Shlomo Aloni reviews the circumstances of the entry into service of these planes which propelled the Heyl Ha'avir into the era of jet fighter jets from 1955, but also on the deliveries of sixty-one Mystère IVA and fifty-eight SMB.2 from 1956 and 1958, respectively. The Franco-Israeli "honeymoon" lasted a dozen years, until 1967, against the backdrop of two open conflicts (1956 and 1967) in which French planes took part, operations related by the author. The illustration, rich, offers many unpublished photos, maps and twenty-four full-page color profiles signed by our friend Vincent Dhorne. While waiting for the suite devoted to Mirage III and Vultures. © Sam Pretat - AIR FAN.