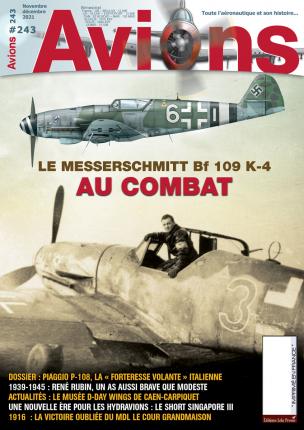 Messerschmitt Bf 109 K, continuation
It is rare that AVIONS does its "Cover" on the same theme twice in a row. This was the case in 2012 for our Special Book devoted to the Messerschmitt Bf 109 E, in 2014-2015 - a few issues apart - for our series on the Landing of June 6, 1944 and from 2016 to 2018 for the Grumman F6F Hellcat , another aviation legend. The year 2021 will therefore be that of the Bf 109 K, the most mysterious and the most successful of the representatives of the "109" family! After presenting to you in our last issue the genesis of the Bf 109 K-4 and its technical aspects, here is now its operational career, for the first time in French if I am not mistaken. This career, which runs from the Battle of the Bulge to the end of the war, via Operation Bodenplatte and the fighting on the Eastern Front, will still require a number to paint a correct overall picture. This AIRCRAFT n ° 243 also presents a complete file on the Piaggio P.108 bomber, the Italian “flying fortress” that we know very little about on this side of the Alps although it was used operationally during the Second World War, whether under the colors of his country of origin or under those of the Luftwaffe.
Some news from our latest publications: issue 2 of LES AILES magazine is on newsstands, with GC II / 5 “Lafayette” in Tunisia as its main subject. The book on the Fieseler Storch is with the printer; it will appear at the end of October. Two books are also in the "short final", the Special AVIONS n ° 54 "Thirty seconds over Tokyo" devoted to the emblematic Doolittle B-25 raid and a book which should be a landmark on transport and transport planes. Air Force liaison from 1945 to the present day (more than 540 pages, 600 photographs and 17 unpublished color profiles). Reading in perspective for enthusiasts!
Christophe cony